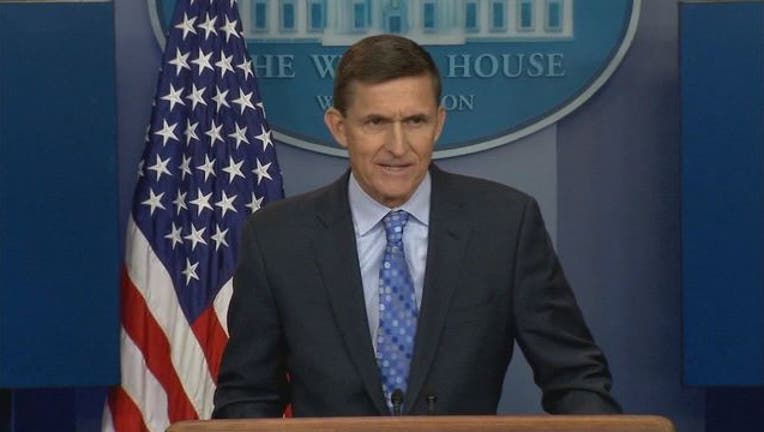 In a letter to the Senate intelligence committee , Flynn's attorneys justified the decision by citing an "escalating public frenzy against him" and saying the Justice Department's recent appointment of a special counsel has created a legally dangerous environment for him to cooperate with the panel's investigation.

"The context in which the committee has called for General Flynn's testimonial production of documents makes clear that he has more than a reasonable apprehension that any testimony he provides could be used against him," the attorneys wrote in the letter, which was obtained by the AP.

Flynn's decision not to cooperate with the Senate committee represents a new legal complication for the expanding government and congressional inquiries into Russian interference in the presidential campaign and contacts between Trump advisers and Russian officials and representatives. Flynn is a key figure in both the FBI investigation headed by special counsel Robert Mueller and in separate Senate and House inquiries.

Trump appointed Flynn, a retired U.S. Army lieutenant general and top military intelligence chief, as his top national security aide in January, only to fire him less than a month later. The White House said that Flynn had misled top U.S. officials, including Vice President Mike Pence, about his contacts with Russian officials, including Russia's ambassador to the U.S.

The Senate committee's subpoena to Flynn dealt heavily with his interactions with Russian officials. It asked for a wide range of information and documents about his and the Trump campaign's contacts with Russians dating back to June 2015.

Flynn's letter to the Senate committee stressed that his decision to invoke his constitutional protection is not an admission of wrongdoing but rather a response to the current political climate in which Democratic members of Congress are calling for his prosecution. Even "truthful responses of an innocent witness" can give the government ammunition that could be used against Flynn, the attorneys noted, quoting a 2001 Supreme Court ruling.

Legal experts had said Flynn was unlikely to turn over the documents without a grant of immunity because doing so might compel him to waive some of his constitutional protections. The attorneys noted that if Flynn complied with the committee's request, he could be confirming the existence of documents, an act that itself could be used against him.

Trump himself walked back into the Russia controversy during his visit to Israel after Prime Minister Benjamin Netanyahu, standing beside him, was asked Monday if he had any concerns about intelligence sharing with the U.S.

After Netanyahu responded — he said the cooperation was terrific — Trump volunteered that he "never mentioned the word or the name Israel" during his recent Oval Office conversation with top Russian diplomats.

That comment referred to revelations that he divulged classified information about an Islamic State threat in his May 10 meeting in the Oval Office with Russia's foreign minister and ambassador. U.S. officials have said the information originated with Israel. However, it has not been alleged that Trump told the Russians that Israel was the source.

Trump has defended Flynn since his ouster and called on him to strike an immunity deal because Flynn is facing a "witch hunt." The president's comments are in stark contrast to his harsh words during the 2016 campaign for people who received immunity or invoked the Fifth Amendment in the probe of former Secretary of State Hillary Clinton's use of a private email server.

"You see, the mob takes the Fifth. If you're innocent, why are you taking the Fifth Amendment?" Trump said during a September campaign rally in Iowa.

On Monday, one of Trump's top GOP supporters, New Jersey Gov. Chris Christie, told reporters during a news conference in Trenton that he had expressed concerns about Flynn during the presidential transition.

"If I were president-elect of the United States, I wouldn't let General Flynn in the White House," Christie said.

Flynn's decision does not fully close the door on future cooperation with the committee. Attorney Robert Kelner said in March that Flynn wants to tell his story "should the circumstances permit." He noted it would be unreasonable for Flynn to agree to be questioned by the committee "without assurances against unfair prosecution.

Flynn's letter comes less than two weeks after the committee issued a subpoena for his documents as part of its ongoing investigation into possible collusion between Russia and Trump's campaign. In addition to the Senate investigation, Flynn is also being investigated by other congressional committees, as well as the ongoing FBI counterintelligence probe and a separate federal criminal investigation in northern Virginia.

Washington lawyer Nina Ginsberg, who has extensive national security law experience, said that if Flynn turned over any personal records in response to the committee's subpoena, he would waive his Fifth amendment rights regarding those documents and have to testify about them.

Ginsberg also noted that the committee faces new complications from the Justice Department's move last week to appoint Mueller as special counsel in the Russia inquiry. If the intelligence committee wants to give Flynn immunity, it will likely have to enter into discussions with Mueller to determine whether the move could impede the FBI's case.

Lawmakers of other key congressional committees are pledging a full public airing as to why former FBI Director James Comey was ousted amid the intensifying investigations into Russia's interference with the U.S. election.

In Sunday TV appearances, both Republican and Democratic lawmakers said they will press Comey in hearings as to whether he ever felt that Trump tried to interfere with his FBI work. Some lawmakers are insisting on seeing any White House or FBI documents that detail conversations between the two, following a spate of news reports that Comey had kept careful records.

Comey was fired by Trump earlier this month. The former FBI director agreed to testify before the Senate intelligence committee after the Memorial Day holiday.

Former CIA Director John Brennan is to testify in open and closed hearings Tuesday before the House intelligence committee, which is conducting its own investigation.