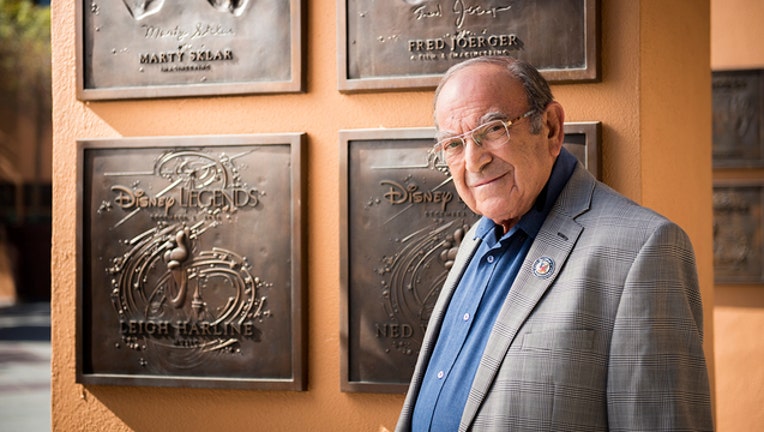 LOS ANGELES (AP) - Martin A. "Marty" Sklar, a right-hand man of Walt Disney and central figure in the development and expansion of his company's theme parks around the world, has died.

Disneyland spokeswoman Suzi Brown confirmed Sklar's death for The Associated Press. A company statement says he died Thursday at his Hollywood Hills home at age 83. No details were released on his cause of death.

"Here you leave today and enter the world of yesterday, tomorrow and fantasy," Sklar said in 2005, reading from a plaque at the front of the park. "That says so much about what Walt intended here," Sklar told the AP.

Sklar had roles in the development of every Disney park, from the original Disneyland in Southern California in 1955 to the Shanghai Disney Resort last year, and was revered by employees as a living link to the founder.

"Everything about Marty was legendary - his achievements, his spirit, his career," Walt Disney Company CEO Bob Iger said in a statement. "He embodied the very best of Disney, from his bold originality to his joyful optimism and relentless drive for excellence. He was also a powerful connection to Walt himself."

Sklar was still a college student at UCLA when he was hired to create The Disneyland News for the original park and became a full-time Disney employee the following year.

For the next 54 years he led the development and expansion of the company's parks, and was among the first to have the unique-to-Disney title of "Imagineer" when he became the company's chief creative leader for theme parks.

"Marty was one of Walt's most trusted advisers and helped turn his most ambitious dreams into reality," said Bob Weis, current president of Walt Disney Imagineering. "For us, it's hard to imagine a world without Marty, because Marty is synonymous with Imagineering."

Sklar scripted speeches for Walt Disney along with design and marketing materials for the parks and a film showing Disney's vision for Walt Disney World and Epcot in Florida before they were built.

He was a low-key and unimposing figure who condensed Walt Disney's ideas into a widely circulated creed called "Mickey's Ten Commandments."

He had a hand in the design of memorable Magic Kingdom attractions such as the "The Enchanted Tiki Room," ''It's a Small World" and "Space Mountain."

Like most Disney designers he had to face criticism from hardcore fans. He felt the need to respond to complaints when "It's a Small World" added characters from Disney films to its usual cast of international children.

"We are not trying to turn this classic attraction into a marketing pitch for Disney plush toys," Sklar said at the time. "We are not 'young marketing whizzes' trying to make a name for ourselves."

When the company made over Disneyland's Tomorrowland in 1998, he explained the company's constant intent to forge forward.

"The future is a moving target, and you have to keep aiming at it," he said.

Sklar retired in 2009 but was still a frequent presence and ambassador at Disney events, including the company's D23 Expo earlier this month.

He is survived by his wife of 60 years Leah, and son Howard.

At Disneyland's 50th anniversary in 2005, he summed up his life's work as he walked into the park.

"I think Disneyland is so much about reassuring people the world can be OK, that things can be orderly, that you can speak to a stranger," he told the AP. "All those things that we are losing or have lost in our daily lives."