CHARLOTTE, N.C. - Krispy Kreme is tapping its "strategic doughnut reserve" in an effort to offset high gas prices for Americans.

The sweet treat chain announced this week that it will sell a dozen original glazed doughnuts for the average U.S. price of a gallon of regular gas. The offer will happen on Wednesdays from April 13 through May 4.

Prices at the pump and energy markets worldwide have spiked in recent weeks amid Russia’s war with Ukraine. Last month, President Joe Biden announced the U.S. would release 1 million barrels of oil per day from the nation’s strategic petroleum reserve over the next six months in an effort to tame gas prices. The U.S. national average soared to about $4.23 a gallon by the end of March, compared with $2.87 at the same time a year ago, according to AAA.

On Tuesday, AAA had the U.S. national average at about $4.10 per gallon. Typically, a dozen original glazed doughnuts would run a few dollars more, according to various menu prices.

Krispy Kreme will set the price based on the average price on Monday of that week, the company said. It will then post the price on its social media pages and on its website. 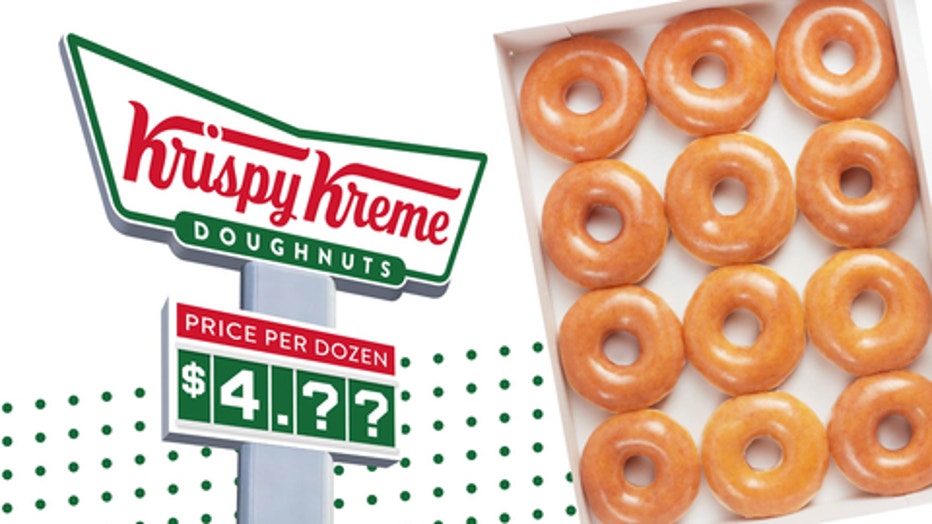 Krispy Kreme will price Original Glazed Dozens at the national average for a gallon of regular gasoline on Wednesdays, the company said. (Photo: Provided / Business Wire)

"While Americans deal with the rising PPG – price per gallon – of gasoline, we’re lowering our PPOG – price per Original Glaze," Krispy Kreme Chief Marketing Officer Dave Skena said in a statement. "Inflation and high gasoline prices are serious and forcing families to make tough tradeoffs... So, for the next several Wednesdays, we hope providing a little doughnut deflation will allow them to share some smiles during a difficult time."

Customers can get up to two dozen original glazed doughnuts, each for the price of a gallon of gas, at participating U.S. locations, via drive-thru, or for pick-up by ordering online and through the Krispy Kreme app, the company said.

The doughnut giant has offered promotions in line with other world events in the past. In 2021, Krispy Kreme offered a free glazed doughnut to anyone who showed a valid COVID-19 vaccination card.

In January, it offered a free box of original glazed doughnuts to blood donors amid an ongoing need for blood donations. That month, the American Red Cross declared its first-ever national blood crisis in the U.S. and warned the public about the worst shortage in over a decade.