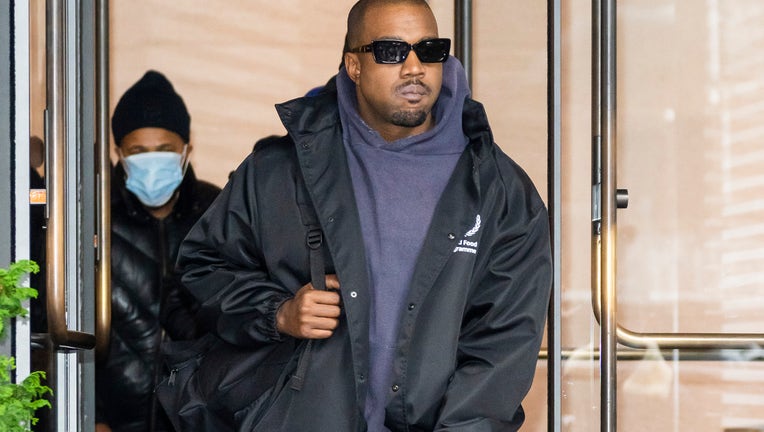 Kanye West is seen in Chelsea on January 05, 2022 in New York City. (Photo by Gotham/GC Images)

Kanye West is disappearing to tend to himself.

Following months during which the Yeezy boss had been publicly addressing his divorce proceedings and co-parenting arrangement with estranged wife Kim Kardashian in interviews and on social media, West has reportedly told the mother of his children that he is "going away to get help."

"For the sake of the kids, Kanye has told Kim he’s not making any public appearances or inflammatory social media statements, and he will go away somewhere to get better," a source close to the Kardashians relayed to Page Six.

The insider said it remains to be seen whether West, 44, is planning to check into a treatment center or if he is simply removing himself from the public limelight and social channels.

The outlet reported that West is staying in Los Angeles to be with the four children he shares with Kardashian — North, 8, Saint, 6, Chicago, 4, and Psalm, 2.

Reps for West did not immediately respond to Fox News’ request for comment.

The reported step back comes in the wake of a recent Instagram ban in which the social media platform suspended West for 24 hours last month after he allegedly violated Meta’s policies on hate speech, harassment and bullying.

Even more recently, the "DONDA" emcee was removed as a performer from Sunday's Grammys.

A representative for West confirmed to Variety that the rapper won't be performing at the awards show due to his "concerning online behavior." Meanwhile, a petition to have West removed as a headliner of Coachella has garnered over 40,000 signatures.

"We have watched Kanye harass, manipulate, and hurt Kim, Pete, and others for over a year now. No one seems to want to stand up to him, and the ones that do, he puts under fire as well," the petition states.

"At this time, Ye is committed to a healthy co-parenting relationship with Kim and is focused on raising their beautiful children," a rep for West told Page Six.

In since-deleted screenshots of text messages between West and Davidson, the "Saturday Night Live" star said, "Yo it’s Skete. Can you please take a second and calm down. It’s 8am and it don’t gotta be like this.

"Kim is literally the best mother I’ve ever met. What she does for those kids is amazing and you are so f---ing lucky that she’s your kids mom," Davidson added. "I’ve decided im not gonna let you treat us this way anymore and I’m done being quiet. Grow the f--- up."

On Friday, Kardashian announced she will be rebranding her KKW Fragrance line to have a new name and website amid her ongoing divorce proceedings with West.

She added that more fragrances are also on the way.

The pair tied the knot in May 2014 before calling it quits in February 2021. She was declared legally single in early March and legally dropped "West" from her name.