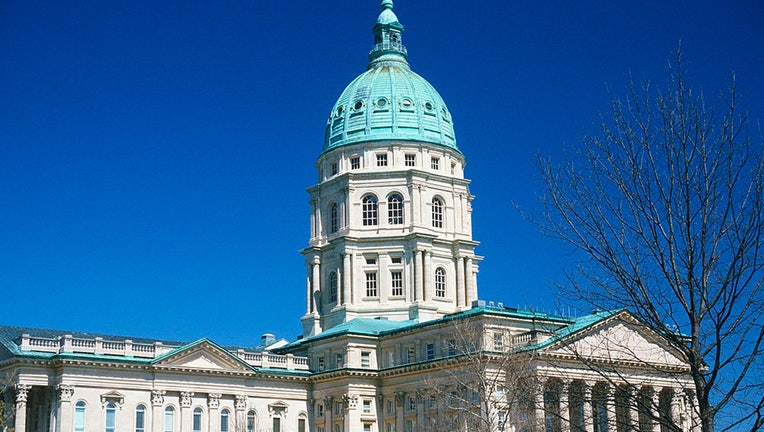 TOPEKA, Kan. - LGBTQ rights advocates called Tuesday for a Kansas state lawmaker to be formally censured after she publicly said she didn't want to share the women's restrooms at the Statehouse with a transgender colleague.

The furor over Helmer's remarks shadowed GOP lawmakers' attempt to override Democratic Gov. Laura Kelly's veto of a bill that would ban transgender athletes from girls' and women's K-12 and college sports.

"We know this has been going on in offices, and back rooms and conversations since the day I was elected," Byers said Tuesday. "The shocking part is that it came out, that someone actually said it."

Helmer stood firmly by her comments while defending a bill she co-sponsored that would make it a felony for doctors to provide hormones or do gender transition surgery for children under 18. She also said she worried about the safety of young children who visit the Statehouse and decried what she called an "in your face" approach to promoting transgender rights from Byers, the state's first elected transgender lawmaker.

The 70-year-old Republican lawmaker also said she tried to make a point when she mistakenly entered a men’s restroom in the House in early 2021. The men, she said, were surprised and upset, so she asked them how they would like it if a woman regularly used their restroom. Pressed on the issue Monday evening, she said parents shouldn’t be allowed to "change" their child’s gender.

"You can’t lop a penis off and then expect, you know, a little boy to now live his life," she said. "He’ll be in regret for the rest of his life."

Supporters of the bill on transgender athletes have said they want to preserve fair competition and are not attacking transgender girls and women. LGBTQ rights advocates said Helmer's comments prove anti-trans bigotry is behind the measure.

The Kansas Senate voted 28-10 on Tuesday to override Kelly’s veto of the transgender athletes bill. A House vote will follow, but the timing wasn’t clear.

Republicans in at least 15 states have enacted bans on transgender athletes, and several have outlawed gender-affirming medical care for children. In Michigan, a conservative state senator accused a Democratic colleague of wanting to "groom" and "sexualize" young children, prompting a response that went viral on social media.

Helmer is a retired Wichita school counselor and nursing instructor, a conservative Republican elected in 2018 to represent a district south of the state's largest city. She participates in rodeo barrel racing and has a sign in her office that says, "My horse is smarter than your honor student."

Byers, 59, is a retired Wichita high school music teacher and band director who was elected to the House in 2020.

In her email Sunday to 25-year-old University of Kansas graduate student Brenan Riffel, Helmer wrote: "Now, personally I do not appreciate the huge transgender female who is now in our restrooms in the Capitol." Riffel, who describes themself as trans-feminine and uses the pronouns they/them, released the email to the Kansas Reflector, a nonprofit news provider.

Tom Witt, executive director of Equality Kansas, called on the Kansas House to censure Helmer, something that would take a formal complaint from another lawmaker and a two-thirds majority vote.

"It is a new level of toxic bigotry that I have not seen in this building before," Witt said.

Byers said several lawmakers have moved away from her in the elevator, and that the Kansas Republican Party’s last platform, drafted in 2018, declares that, "We believe God created two genders, male and female."

In her email to Riffel, Helmer wrote, "A doctor can inject meds and dilute but cannot destroy what God has done in the perfection of the HUMAN BEING."

Riffel said in an interview that they weren't surprised by Helmer's response, "considering what it would take" to sponsor the bill banning gender-affirming care for trans youth.

"The rhetoric against the LGBTQ community has been the same for years, that we’re a threat to society; we’re going to hurt people," said Riffel. "I just want to go about and just be myself."