KABUL, Afghanistan - American forces working under heightened security and threats of another attack pressed ahead with the evacuation from Kabul's airport Friday, the day after a deadly suicide bombing wrote a devastating closing chapter on the United States' withdrawal from its war in Afghanistan.

The death toll rose to 169 Afghans, a number that could increase as authorities examine fragmented remains, and 13 U.S. service members.

The White House and the Pentagon warned there could be more bloodshed ahead of President Joe Biden's fast-approaching deadline Tuesday to end the airlift and withdraw American forces. The next few days "will be our most dangerous period to date" in the evacuation, White House press secretary Jen Psaki said.

Thursday's bombing — blamed on Afghanistan’s offshoot of the Islamic State group, an enemy of both the Taliban and the West — marked one of the most lethal attacks the country has seen. The U.S. said it was the deadliest day for American forces in Afghanistan since 2011.

As the call to prayer echoed Friday through Kabul along with the roar of departing planes, the anxious crowds thronging the airport in hope of escaping Taliban rule appeared as large as ever, despite the scenes of victims lying closely packed together in the aftermath of the bombing. 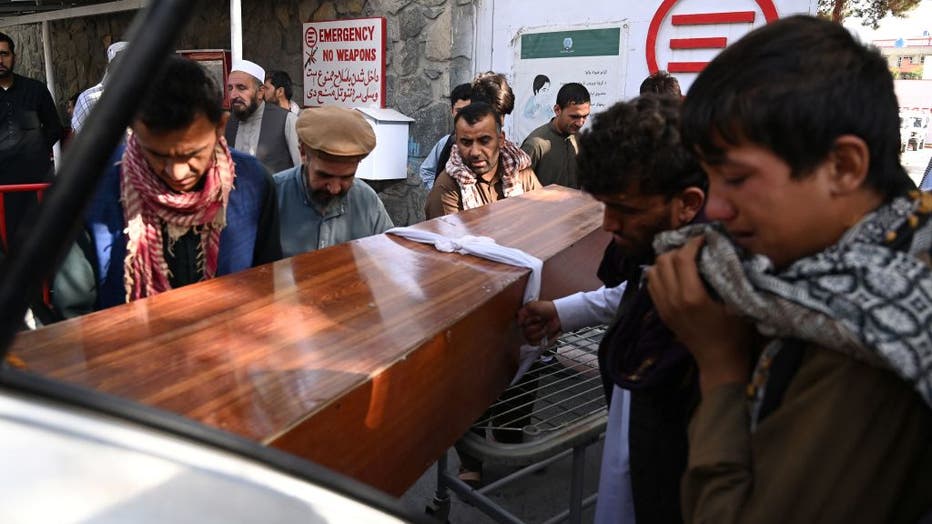 Relatives load in a car the coffin of a victim of the August 26 twin suicide bombs, which killed scores of people including 13 US troops outside Kabul airport, at a hospital run by the Italian NGO Emergency in Kabul on Aug. 27, 2021. (Photo by AAMIR

Around the world, newly arriving Afghan evacuees, many clutching babies and bare handfuls of belongings in plastic bags, stepped off evacuation flights in the United States, in Albania, in Belgium and beyond. In Kabul on Friday, Afghan families looked for loved ones among bodies, placed along a hospital sidewalk for identification, of bombing victims who died pleading for a seat on the U.S.-run airlifts.

Afghans, American citizens and other foreigners were all acutely aware the window was closing to get out via the airlift.

Jamshad went to the airport Friday with his wife and three small children. He clutched an invitation to a Western country he didn’t want to identify.

"After the explosion I decided I would try. Because I am afraid now there will be more attacks, and I think now I have to leave," said Jamshad, who like many Afghans uses only one name.

RELATED: Kabul airport suicide attacks: 'We will hunt you down and make you pay,’ Biden says

The Afghan victims ranged from a hard-working young journalist to an impoverished father, driven to to the airport by hopes of a better life.

The American dead were 11 Marines, a Navy sailor and an Army soldier. Many had been tiny children when U.S. forces first entered Afghanistan in 2001.

One, Marine Lance Cpl. Kareem Mae'lee Grant Nikoui, sent a video to a family friend in the United States just hours before he was killed, showing himself smiling and greeting Afghan children.

"Want to take a video together, buddy?" Nikoui asked young boy, leaning in to be in the picture with him. "All right, we're heroes now, man."

British officials said two of the country's citizens and the child of another Briton also were among those killed when the bomb exploded.

On the morning after the attack, the Taliban used a pickup truck full of fighters and three captured Humvees to set up a barrier 500 meters (1,600 feet) from the airport, holding the crowds farther back from the U.S. troops at the gates than before.

U.S. military officials said that some gates were closed and other security measures put in place. They said there were tighter restrictions at Taliban checkpoints and fewer people around the gates. The military said it had also asked the Taliban to close certain roads because of the possibility of suicide bombers in vehicles.

The Pentagon said the U.S. would keep up manned and unmanned flights over the airport for surveillance and protection, including the use of AC-130 gunships.

U.S. officials said evacuees with proper credentials still were being allowed through the gates. Inside, about 5,400 evacuees awaited flights.

In Washington, U.S. commanders briefed Biden on developing plans to strike back at the Islamic State and make good on the president's vow to the attackers to "hunt you down and make you pay."

Biden pronounced the U.S. effort to evacuate Americans, Afghan allies and others most at risk from the Taliban a "worthy mission."

"And we will complete the mission," he said.

The U.N. Security Council called the targeting of fleeing civilians and those trying to help them "especially abhorrent."

The Taliban have wrested back control of Afghanistan two decades after they were ousted in a U.S.-led invasion following the 9/11 attacks. Their return to power has terrified many Afghans, who have rushed to flee the country ahead of the American withdrawal.

More than 100,000 people have been safely evacuated through the Kabul airport, according to the U.S., but thousands more are struggling to leave in one of history’s biggest airlifts.

The White House said Friday afternoon that U.S. military aircraft had flown out 2,100 evacuees in the previous 24 hours. Another 2,100 people left on other coalition flights.

The number was a fraction of the 12,700 people carried out by U.S. military aircraft one day early in the week, when the now two-week-old airlift not only met but exceeded intended capacity for a couple days.

France ended its own evacuation effort and pulled up stakes on a temporary French embassy at the airport, leaving Taliban-ruled Afghanistan. U.S. allies and others have ended or are ending their airlifts, in part to give the U.S. time to wrap up its own operations.

The Taliban have said they will allow Afghans to leave via commercial flights after the U.S. withdrawal, but it is unclear which airlines would return to an airport controlled by the militants.

Untold numbers of Afghans, especially ones who had worked with the U.S. and other Western countries, are now in hiding, fearing retaliation despite the group’s offer of full amnesty.

The new rulers have sought to project an image of moderation in recent weeks — a sharp contrast to the harsh rule they imposed from 1996 to 2001, when they forbade girls to get an education, banned television and music and held public executions.

Akhgar reported from Istanbul, Gannon from Islamabad and Anna from Nairobi, Kenya. Darlene Superville in Washington and Rahim Faiez in Turkey and Elaine Ganley in Paris contributed along with other Associated Press writers around the world.