The protesters previously gathered at the Windermere home owned by&nbsp;former Minneapolis police officer&nbsp;Derek Chauvin, who is charged in the death of George Floyd.

WINDERMERE, Fla. - On Saturday, hundreds of protesters gathered in Downtown Orlando as they expressed their desire for justice following the death of George Floyd in Minneapolis. A police officer was arrested and charged with his murder on Friday. 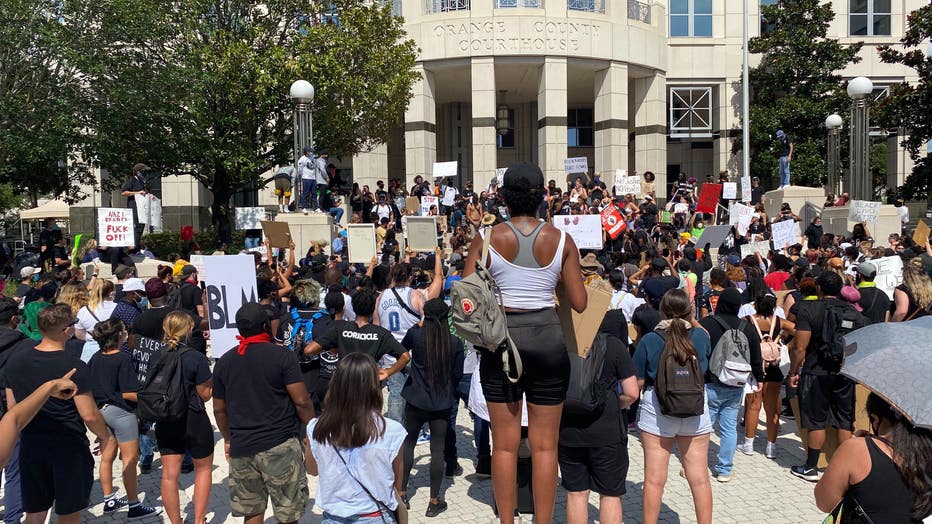 At one point, Orange Avenue was even shut down as people marched through the streets.

Woman talks to FOX 35 about the protests in Downtown Orlando

Hundreds of protesters gathered in Downtown Orlando as they expressed their desire for justice following the death of George Floyd.

RELATED: Trump warns White House protesters would have been met by 'vicious dogs', if they breached fence

Earlier in the morning, protesters began gathering at the Windermere home owned by former Minneapolis police officer Derek Chauvin, who is charged in the death of George Floyd.

Late Friday night, a small group of protesters remained in front of the Orlando-area home owned by Derek Chauvin, the Minneapolis police officer seen on video kneeling on the neck of George Floyd before his death.

The 'Justice For George' peaceful protest began at noon following a night of protests on Friday at the home.

A post promoting the event called the gathering spot the 'home of the murderer.' Those attending are advised to wear PPE and "shapeless clothes with no logos." Protesters are also told to "cover faces and identifiable features."

The Orange County Sheriff's Office stated earlier that Chauvin was not currently at the home located in Windermere.  Deputies maintained a presence at the residence into the evening and no violence was reported. FOX 35 News reporter Matt Trezza says that the home did incur some vandalism.

It was announced on Friday that Chauvin, 44, had been arrested, charged with third-degree murder and second-degree manslaughter.