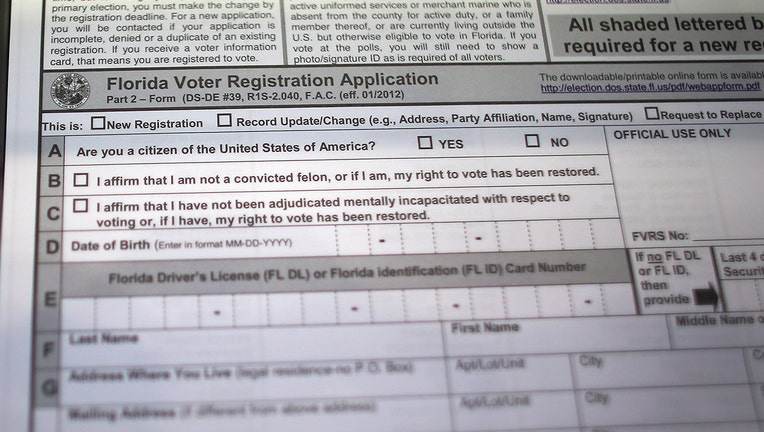 TALLAHASSEE, Fla. - A federal judge has fast-tracked a lawsuit seeking to extend the period of time for Floridians to register to vote in the November presidential election, after the state’s online system repeatedly crashed in the hours leading up to a registration deadline Monday.

Gov. Ron DeSantis’ administration extended the registration deadline until 7 p.m. Tuesday because of the problems, but voting-rights groups quickly filed a lawsuit alleging the extra time was inadequate.

Tens of thousands of people used the online system to register during Tuesday’s extension, a lawyer for Secretary of State Laurel Lee told Chief U.S. District Judge Mark Walker during a hearing Wednesday.

“Your honor, based on my preliminary conversations, the number of people who registered during the extension period was north of 40,000,” said Mohammad Jazil, an attorney with the Hopping Green & Sams firm who represents Lee.

Walker gave the state until 7:30 p.m. Wednesday to respond to the lawsuit and set an 8 a.m. hearing Thursday to consider the plaintiffs’ request for a preliminary injunction.

The online registration system has a history of meltdowns in the run-up to voter-registration deadlines. Voting-rights groups warned Lee that the system needed to be stress-tested in advance of Monday’s registration deadline because of heightened enthusiasm over the contest between President Donald Trump and Democratic presidential nominee Joe Biden.

Also, many voter-registration groups that traditionally canvassed door-to-door shifted their efforts to using the online system because of the coronavirus pandemic, according to court documents.

Lee said Tuesday that the website was receiving more than 1 million hits per hour during Monday’s meltdown.

But pressed by Walker, Jazil could not say how many people were unable to register while the site was offline.

Do you have any idea?” the judge asked.

“When the website became really slow, we were seeing 1.1 million visits per hour, so for the six hours it was down, that’s 6.6 million visits. That’s about the entire state of Colorado trying to get on the website during that six-hour window, which was unusual,” Jazil replied.

“I’m not sure there are 6.6 million Floridians that would be eligible to vote that aren’t registered. I can’t imagine,” Walker responded.

James Uthmeier, a deputy general counsel for DeSantis, pointed out that the number of people accessing the website was greater than those who were trying to register to vote.

In the lawsuit, organizations including the Dream Defenders, New Florida Majority, Organize Florida and the Florida Immigrant Coalition asked Walker for a temporary restraining order and a preliminary injunction to prohibit the state from enforcing the voter-registration deadline. The groups, which are engaged in registration efforts, asked Walker to extend the deadline for two days after he issues an order in the lawsuit.

Walker, however, turned down the request for a temporary restraining order, writing in a Tuesday evening order that the plaintiffs “have failed to show that an immediate and irreparable injury will result before defendants can be heard in opposition.”

During Wednesday’s hearing, the judge floated a possible solution for Floridians who were unable to access the website, posing a scenario in which “folks were permitted to come and file an affidavit saying, ‘I tried when it crashed to get on, and I wasn’t aware (of) an opportunity to fix it until after the extra five hours’” had expired Tuesday.

“It’s similar to those cases where we said, here’s the time frame for those affected, and those who swore under oath they were affected, that they could fix it and register,” Walker said, pushing the state for a “drop-dead date” when people could be added to the voting rolls.

“What’s the time frame that would have to be done … so they can actually vote in the upcoming election?” he asked.

“Unfortunately, I don’t have an exact answer right now. I’m trying to figure it out myself,” Jazil, who frequently represents Lee in elections-related lawsuits, said.

Wednesday’s hearing came less than 24 hours after Lee acknowledged that the online system had crashed in the hours leading up to Monday’s 11:59 p.m. deadline to register for the Nov. 3 elections. Around noon Tuesday, she extended the deadline to 7 p.m. and raised the specter that hackers had possibly infiltrated the system. She asked state and federal law enforcement officials to investigate the matter.

But Tuesday evening, Lee issued a prepared statement saying officials “have not identified any evidence of interference or malicious activity impacting the site.”

Florida congressional Democrats urged the Republican leaders to give voters until the end of Wednesday to register and asked for an independent investigation into the website’s failure. They said the deadline extension Tuesday was inadequate.

People who want to vote next month should not “be penalized for failing to become aware of an altruistic, though hastily-crafted remedy consisting of just several added hours of registration availability,” the Democrats wrote to Lee and DeSantis on Tuesday.

“Without a robust, well-publicized extension remedy, this situation has the superficial appearance of being another example of the voter suppression tactics that Florida has sadly come to be synonymous with in recent years. An independent review of this failure could eliminate that perception,” the Democrats added.

But DeSantis defended the decision to extend the deadline until 7 p.m. Tuesday.

Speaking to reporters at an event in The Villages, the governor said Tuesday the extra hours equate to “a similar timeframe from when we were experiencing the difficulties yesterday.”