Jurors on Monday listened to audio recordings in which he referred to the violence that could ensue if their arguments were allowed to escalate.

"The next move, if I don’t walk away ... it’s going to be a bloodbath, like it was on the island," Depp says on the recording.

In other audio clips, Depp loudly shouts vulgarities at his wife, calling her a degrading name and yelling, "You stupid f—-" at her.

Depp winced on the stand as the clips were played, while Heard appeared to fight back tears.

The libel lawsuit was filed by Depp against Heard over an op-ed piece she wrote in The Washington Post in 2018 in which Heard refers to herself as a "public figure representing domestic abuse." The Post article doesn't mention Depp by name, but he says it clearly refers to her allegation that she suffered physical abuse at his hands. Depp denies the allegation. 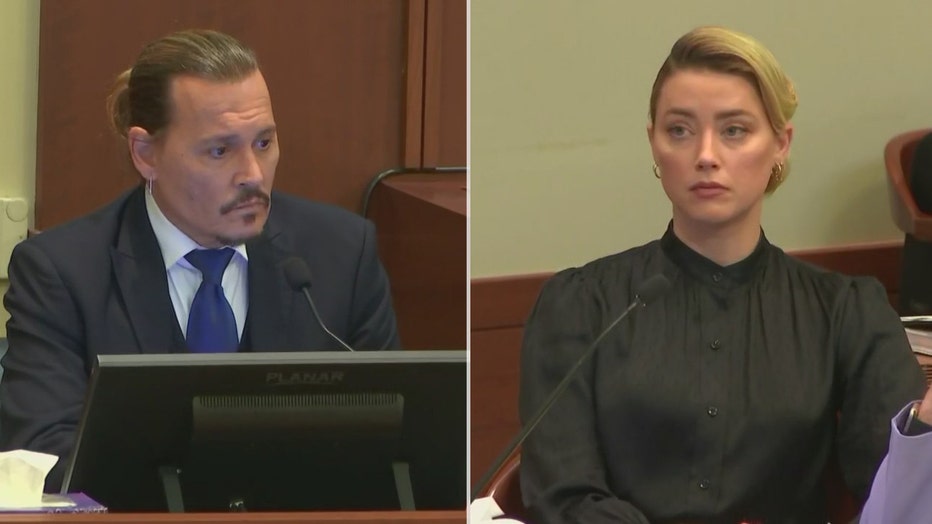 The trial began several weeks ago. Last week, Depp testified revealing details about his past drug use, suffering a mental breakdown and other disturbing details about his relationship with Heard. Heard's attorneys have highlighted text messages Depp sent to friends recounting alcohol and drug use and have shown photos that showed cocaine and other drugs they say belonged to the actor.

Attorneys for Amber Heard questioned her ex-husband Johnny Depp about photos that appeared to show cocaine and large bags of marijuana they say belonged to the actor.

The clips were part of a grueling cross-examination of Depp that concluded late Monday morning, as he took the stand for a fourth day of testimony over his allegations that Heard falsely portrayed him as a domestic abuser.

Heard’s lawyers continued their onslaught of questions during their cross-examination. focusing on Depp’s drinking, drug use and charged interactions with Heard during their relationship.

During Monday’s testimony, Depp actually said very little, although on redirect he did seek to explain some of his coarse language and again denied that he cut off his own finger during a fight with Heard, even though he told people as much at the time. He now says the finger was severed when Heard threw a vodka bottle at him.

"Why would I start lopping off digits in my 50s?" he said, showing his right hand to the jury. "I can’t take responsibility for what I now call Little Richard, my chopped finger."

Most of the questioning consisted of Heard’s lawyer playing audio clips or reading vulgar text messages sent by Depp and asking Depp if he’d read them correctly.

Throughout the cross-examination, Depp showed his displeasure with Rottenborn’s questions. When Rottenborn interrupted one response, Depp said, "I was talking." When Rottenborn said he considered the question to be fully answered, Depp responded, "as long as you’re happy."

Depp also expressed disapproval as Rottenborn read headlines from a series of negative articles written about the actor, some dating back to 2014.

"These are all hit pieces. These are dreck," Depp said.

Rottenborn introduced the articles to try to demonstrate that the 2018 Post article at the center of the case is not what damaged his reputation, but instead a long history of bad behavior.

During the trial, Heard's legal team has accused Depp of physically and sexually assaulting her on multiple occasions -- before and during their brief marriage. Depp said Heard's allegations of his substance abuse have been "grossly embellished" and that he was never out of control during that time period. The two met in 2009, got married in 2015 and Heard filed for divorce a year later.

Earlier in the trial, Depp's older sister, Christi Dembrowski, faced a barrage of questions from Heard's lawyers about Depp's alcohol and drug use.

Isaac Baruch, a longtime friend and next-door neighbor of Depp also testified that Amber Heard told him Depp had hit her but he never saw evidence of abuse on her face.

Johnny Depp is expected to take the stand once again Thursday in a Fairfax County, Virginia courtroom in the defamation trial against his ex-wife Amber Heard.

A former personal assistant to Amber Heard, Kate James, testified in a video deposition that was played in court last week said she never saw the actress suffer any physical abuse at the hands of her then-husband but did say Heard once spit in her face when she asked for a higher salary.

Lawyers also presented a video deposition of Laurel Anderson, a couple's therapist who worked with Heard and Depp in 2015 who said both suffered childhood abuse. As a couple, they were engaged in "mutual abuse," Anderson testified.