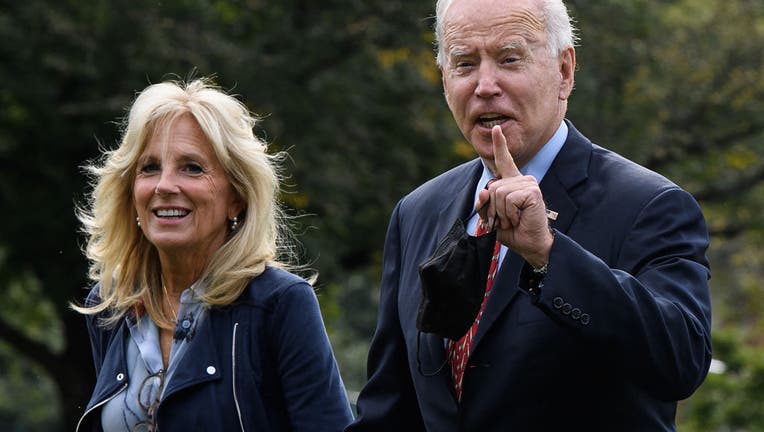 US President Joe Biden and First Lady Jill Biden arrive at the White House in Washington, DC, on October 4, 2021 after spending the weekend in Wilmington, Delaware. (Photo by Nicholas Kamm / AFP) (Photo by NICHOLAS KAMM/AFP via Getty Images)

WEST COLUMBIA, S.C. - Jill Biden on Sunday returned to the South Carolina Baptist church where she says she began to repair her relationship with God following her son's death from brain cancer six years ago.

The first lady quietly flew to West Columbia for a surprise appearance at the 50th anniversary celebration for Pastor Charles B. Jackson Sr. of Brookland Baptist Church. But she ended up giving one of the most extensive explanations yet of how her faith wavered after Beau Biden's death and how she found her way back to God with help from her "prayer partner" — Robin Jackson, the pastor's wife.

Biden praised Charles Jackson for presiding over a ministry that helps feed the hungry, provides college scholarships and runs a health and wellness program.

La Verne Ford Wimberly spoke with FOX Television Stations about how she inspired the internet with her colorful Sunday outfits for virtual church.

"You brought countless people to God's grace," she told him. "You remind us that we are the body of Christ."

But she opened her remarks by retelling the story of how she and Robin Jackson met, saying the relationship has "shaped my life."

They met in May 2019, shortly after Joe Biden visited the church with his wife after he announced his candidacy for the 2020 Democratic presidential nomination.

Both women have said Jackson approached Jill Biden and asked to pray with her.

"And I don’t know if she sensed how moved I had been by the service" or seen the grief hiding behind her smile, the first lady said Sunday.

"But I do know that when she spoke it was as if God was saying to me: ‘OK, Jill, you had enough time. It’s time to come home."

The Bidens' son Beau, who was 46, married and had two young children, died of brain cancer in 2015. The first lady has said she prayed and prayed that he would live, and was devastated when her prayers went unanswered and he passed away.

"I felt betrayed, broken," she said Sunday, her voice breaking. She said her own pastor emailed her occasionally to check in and invite her back to service.

"But I just couldn’t go. I couldn’t even pray. I wondered if I would ever feel joy again," she said.

Four years later, she had that chance encounter with Robin Jackson.

"Every Wednesday Robin would text Dr. Jill to let her know she had called their names in prayer," the city's newsletter said in January 2021. "Dr. Jill would always return a text expressing appreciation." Jill Biden uses the professional title "Dr." because of her doctorate degree.

Jill Biden told talk-show host Kelly Clarkson in February 2021 that regular contact with Robin Jackson had made a difference.

"It really helped me find my faith again," the first lady told Clarkson.

She occasionally accompanies the president, a devout Catholic, to Mass and was with him Saturday when he worshipped at Holy Trinity Catholic Church in Washington.

Her role in celebrating the pastor's 50th anniversary was intended to be a surprise for Robin Jackson. The Jacksons' son, the Rev. Charles B. Jackson Jr., said his mother did not know the first lady was coming.

"It took everything in us to keep it from her," he told the audience after the first lady had concluded her remarks, calling her appearance "an expression of love and friendship."

The White House did not publicly announce Sunday's trip and the first lady flew, apparently by coincidence, on an unmarked D.C. Air National Guard airplane. But she also travels in a motorcade with police escorts, and flashing lights and sirens, and U.S. Secret Service agents show up at her destinations ahead of time to make sure the properties are secure.

She arrived at the church about a half-hour before the event began and, wearing a black face mask, shared a front-row pew with the Jacksons and Crystal Person, who is originally from the area and is married to Fran Person, a longtime personal aide to Joe Biden.

Robin Jackson was among religious leaders who recited prayers for Joe Biden during a virtual prayer service the morning after his inauguration in January.