A 12-year-old boy who runs a mile every time a first responder dies in the line of duty honored Daytona Beach Police Officer Jason Raynor on Thursday.

WINTER SPRINGS, Fla. - A 12-year-old boy who runs a mile every time a first responder dies in the line of duty honored Daytona Beach Police Officer Jason Raynor on Thursday.

On his roughly 980th mile he has run for these fallen heroes, Zechariah Cartledge carried the "Thin Blue Line" American flag with pride.

"Even though some people may just think it’s a mile, we know at heart it’s a tribute," he said.

For years, Cartledge has completed these mile-long runs.  This time is was for Raynor who died this week after being shot in the head two months ago.

"This run is going to be a little tough on me, but at the end, we want to make sure that the support and the hope for the future is the highest possible," said Cartledge.

Law enforcement officers from many different agencies came out for this event, one of the larger runs completed by Cartledge.  All of them feel the same emotion, including Mario Escobar, the brother of fallen Orlando Police Officer Kevin Valencia. 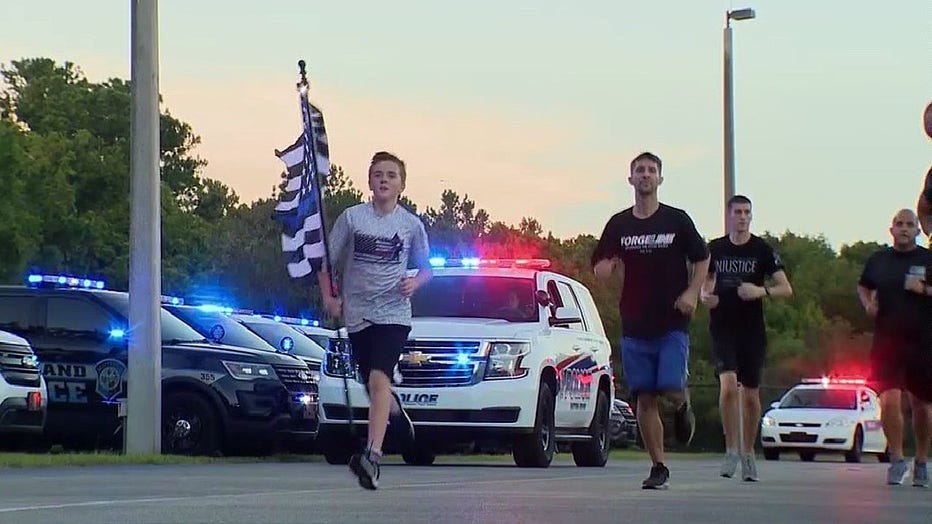 Valencia died earlier this year after a three-year battle with injuries from a shooting in the line of duty.

"I know what his family is going through, so yeah just wanted to show some support for his family and his police department."