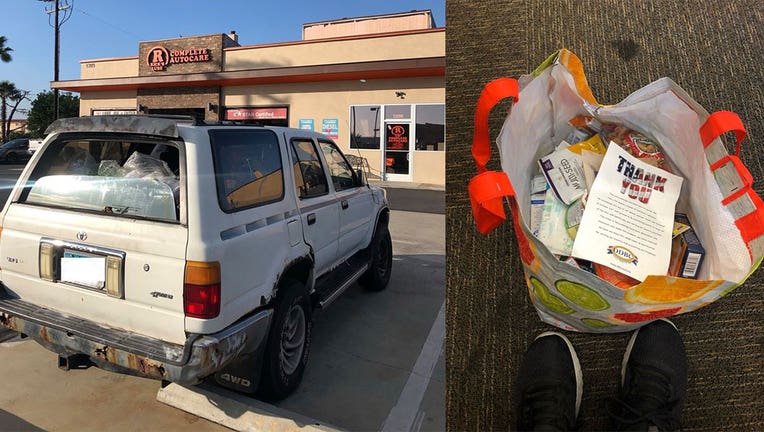 CARSON, Calif. - Deputies with the Los Angeles County Sheriff's Department, Carson Station, went above and beyond to help a homeless veteran.

Authorities received numerous calls for service reporting a seemingly abandoned vehicle on 213th Street and Vera Street in Carson. Deputies responded and spoke to the owner of the vehicle, a homeless veteran, who told them that the vehicle was not in working order, and he was unable to pay for the repairs.

"Deputies considered towing the vehicle for being abandoned, however, that would only displace a homeless veteran even further," the Carson Sheriff's Station wrote in a Facebook post. "Deputies used engagement versus enforcement and came up with a better solution."

The deputies were able to coordinate with local businesses in order to have the vehicle towed and repaired free of charge to the owner.

"Joe Kruger, from 'Kruger Tow' had the vehicle moved free of charge to 'Rick’s Lube Complete AutoCare.' Dignity Health Sports Park volunteered to pay for the cost of vehicle repairs. A great example of Dignity Health Sports Park engagement and service to the City of Carson! 'Rick’s Lube' donated the parts and labor needed to get the vehicle in working order at no cost to the owner," the sheriff's department wrote.

The deputies then enlisted the help of the Second Supervisorial District of the Board of Supervisors in order to expedite the application for Veteran’s Affairs Supportive Housing, which in turn allowed them to find an apartment for the veteran.

In the meantime, the sheriff's department coordinated with the United States Veterans Initiative to make a temporary bed available for the veteran.

"I’m extremely proud of this story from our Carson Sheriff’s Station," Sheriff Alex Villanueva said. "A great example of the good work we can accomplish when we all work together to help everyone in the communities we serve!"