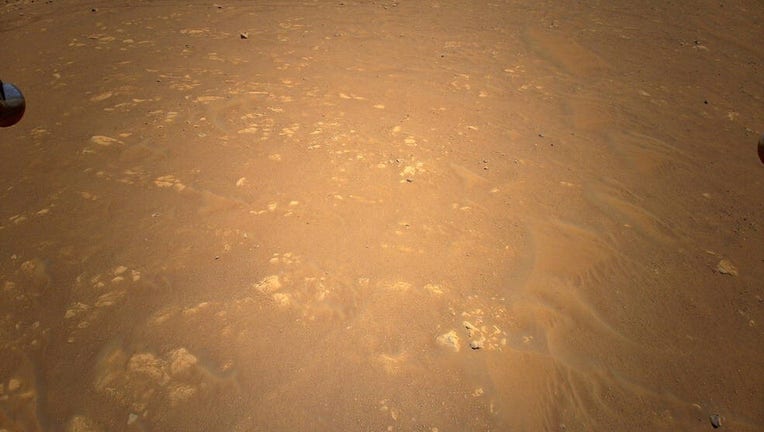 NASA's Ingenuity Mars helicopter captured a stunning aerial shot of the red planet and Perseverance Mars rover on its third flight on Sunday.

The agency's Southern California-based Jet Propulsion Laboratory (JPL) wrote in a description of the image that the helicopter had been flying at an altitude of 16 feet and was around 279 feet away from the rover at the time it was taken.

"I spy with my little eye…a rover. See if you can spot @NASAPersevere in this image taken by the #MarsHelicopter during its third flight on April 25, 2021," they wrote in an accompanying tweet. "Ingenuity was flying at an altitude of 16 ft (5 m) and ~279 ft (~85 m) from the rover at the time."

"Oh hey, there I am!" NASA's Perseverance Twitter account replied. "Never thought I’d be the subject of another photographer on Mars. Great capture by the #MarsHelicopter team."

It's an unprecedented view of a Mars rover. Space.com reported Wednesday that while other NASA Mars rovers had taken photos in previous years, the rovers were tethered to the planet's surface.

After landing with Perseverance on Mars in February, Ingenuity has successfully and autonomously attempted three experimental flights, all with various degrees of difficulty.

On Thursday at 10:12 a.m. ET, the rotorcraft was set to conduct its fourth flight.

It would depart from Wright Brothers Field -- the name of the Martian airfield -- climbing to an altitude of 16 feet and head southward for 276 feet.

"As it flies, the rotorcraft will use its downward-looking navigation camera to collect images of the surface every 4 feet (1.2 meters) from that point until it travels a total of 436 feet (133 meters) downrange," NASA wrote in a Wednesday news release. "Then, Ingenuity will go into a hover and take images with its color camera before heading back to Wright Brothers Field."

As Ingenuity has met or surpassed all of its "tech demo goals," NASA wrote in a tweet that they would "push performance" and up the duration airborne to 117 seconds, increase the max airspeed to 3.5 meters per second and more than double the total range.

The first data from the flight is scheduled to return to JPL at 1:21 p.m. ET.

After reviewing the data, the Ingenuity team will consider a plan for its fifth and final flight.

"When Ingenuity’s landing legs touched down after that third flight, we knew we had accumulated more than enough data to help engineers design future generations of Mars helicopters," J. "Bob" Balaram, Ingenuity chief engineer at JPL, said in the release. "Now we plan to extend our range, speed, and duration to gain further performance insight."