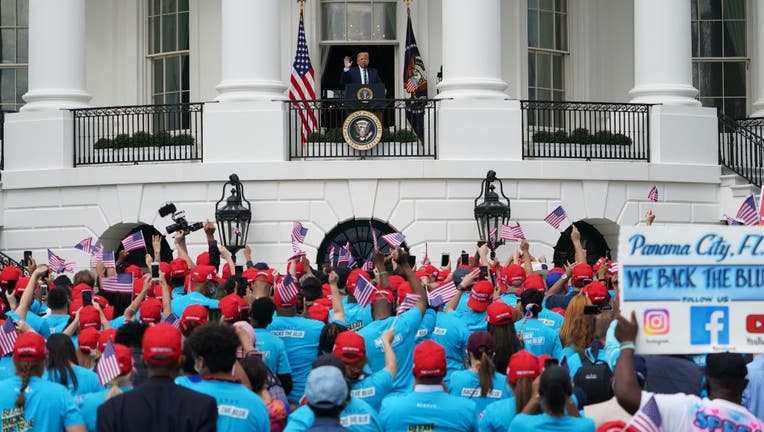 FILE - US President Donald Trump spoke publicly for the first time since testing positive for COVID-19, as he prepares a rapid return to the campaign trail just three weeks before the election. (MANDEL NGAN/AFP via Getty Images)

LOS ANGELES - President Donald Trump on Saturday made his first public appearance since returning to the White House after being treated for the coronavirus. The White House has refused to declare that he is no longer contagious, and the gathering of hundreds of people on the South Lawn went ahead despite the guidance of public health officials.

Trump delivered an address on his support for law enforcement from Blue Room balcony to a friendly crowd. The president wore a mask as he walked for the speech but took it off to make his remarks. He received an enthusiastic response from his supporters.

“I’m feeling great,” said Trump, who said he was thankful for their good wishes and prayers as he recovered.

A person with knowledge of the planning said all attendees must bring masks or will be provided with them, and also will be given temperature checks and asked to fill out a brief questionnaire. Following CDC guidelines will be strongly encouraged, which mask-wearing and social distancing, the Associated Press reported.

Trump will also hold a rally in Florida on Monday. The event was originally scheduled for Oct. 2, the day after Trump tested positive for COVID-19.

The president addressed the large crowd even as the White House refuses to declare that he is no longer contagious and against the guidance of public health officials.

The White House insisted the event on the South Lawn was an official event and not a campaign rally. But Trump used the address to make broadsides against the Democratic ticket of former Vice President Joe Biden and Sen. Kamala Harris.

“I think we’re gonna swamp them by so much," he said.

Trump appeared healthy, though perhaps a little hoarse, during the 18-minute speech that was intended to send the message that he's back and ready to resume his battle for reelection.

Security was stepped up around the White House before the event, which was called a “peaceful protest for law & order.” Police and the Secret Service closed surrounding streets to vehicles and shut down Lafayette Square, the park near the White House that has long been a gathering place for public protest.

Staff of conservative group BLEXIT and other supporters of President Trump gathered in front of the White House on October 10, ahead of the president’s first public event since he announced that he tested positive for COVID-19. (CREDIT: Lynette Chatman via Storyful.)

Since returning to the White House, the president has not been seen in public, other than in videos apparently filmed at the White House and posted to his social media accounts.

White House physician Dr. Sean Conley issued a memo Thursday stating that Trump had completed his therapy for COVID-19 and that he has responded “extremely well without evidence on examination of adverse therapeutic effects.”

“Saturday will be day 10 since Thursday’s diagnosis, and based on the trajectory of advanced diagnostics the team has been conducting, I fully anticipate the president’s safe return to public engagements at this time,” Conley said.

The news also came amid a growing outbreak of coronavirus cases at the White House, where more than two dozen staffers, allies of the administration, senators and journalists have now tested positive for COVID-19.

Many of them attended a Rose Garden ceremony to announce Judge Amy Coney Barrett’s nomination to the Supreme Court last Saturday, which increases concerns among some that a public event at the White House hosted by Trump is too soon.

“I was not surprised to see a super-spreader event given the circumstances," Fauci said of the Supreme Court Rose Garden event in an interview with the Associated Press. “Crowded, congregate setting, not wearing masks. It is not surprising to see an outbreak," he said.