The shooting, which happened on March 21, resulted in the death of a 21-year-old man. FOX 10's Marissa Sarbak reports.

TEMPE, Ariz. - The Tempe Police Department is investigating a shooting in the parking lot of an Ikea store that left a man dead, and say it likely stemmed from a drug deal.

According to police, the shooting happened at the Ikea near I-10 and Elliot Road at around 1 p.m. on March 21.

Sgt. Hector Encinas said officers found a male with a gunshot wound and Tempe Fire Medical Rescue Department treated him, but he ultimately died. His name is Chris McCrimmon, 21.

"Maricopa PD along with Gila River PD had located a vehicle that they believed matched the description from the information we provided. They were able to stop that vehicle and safely get two folks into custody," Encinas said.

He further explains, "Luckily, Maricopa PD and Gila River PD let us know that they were behind a vehicle matching that description and requested, based on investigation, that they pull that vehicle over and detain all occupants involved and that’s where we are at, and luckily they were detained without incident."

Isaiah Williams, 18, was identified as one of the suspects. A second suspect is reportedly an unidentified 17-year-old boy. 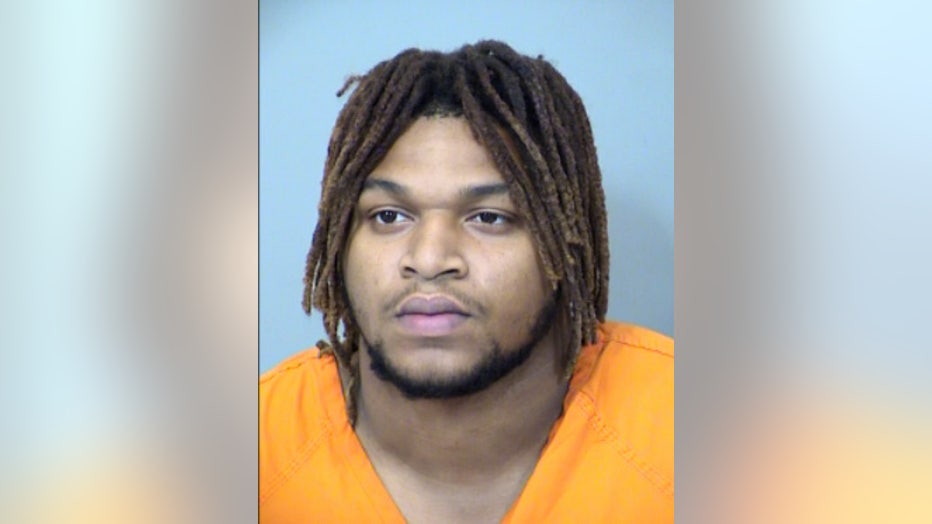 According to court documents, Williams and the other suspect told police they were meeting the victim to buy marijuana.

"They planned had planned to beat the victim up and take his property because he had robbed Williams before," read a portion of the court documents. When the victim recognized Williams, he tried to pull a gun from his waistband but was hit by the other suspect.

"All three subjects fought for control of the firearm that the victim had," court documents read. "The weapon discharge 2-3 times and the victim was shot."

Williams and the other suspect left the scene with the backpack of marijuana and the gun. Police said when officers stopped the suspects' vehicle in Maricopa, the backpack was thrown from the car.

"The backpack was later found to have marijuana, a revolver with one fire cartridge, and a 10mm Glock handgun with 8 of 14 in the magazine," court documents read.

Williams was booked into jail and is accused of multiple charges, including first-degree murder and armed robbery. The second suspect has not been identified.

A day later, the Tempe Police Department held a press conference, detailing the shooting and where the investigation is so far and says these types of drug and gun-related crimes are on the rise.

"I would say yes to both. We've seen gun violence, we've seen an increase in violence itself. I can't even tell you the number of investigations we have ongoing that involve illicit drugs," says Det. Natalie Barela.

She wants the community to know this incident was isolated, and in a typically busy shopping center, authorities don't want this to be a cause for concern to the local businesses or people who frequent them.

"We want the community to know this was an isolated, targeted incident between people who were acquaintances. We don't feel this is something the community should be worried about," Barela said.

The Tempe Police Department held a news conference a day after a victim was shot and killed in an Ikea parking lot on March 20.

Ikea shoppers and those who were nearby when the shooting broke out were in disbelief to see a shooting happen in broad daylight and in such a busy shopping center.

"When I heard he got shot, I was completely shocked," Aiyana Rios said. "We were driving on our way to Ikea and we just seen a bunch of cop cars and we were like whoa what’s going on and then we kind of parked nearby to see if we could see what was going on and we saw a guy having CPR done so we were worried and we said a prayer."

Isaiah Williams, 18, was booked into jail and is accused of multiple charges, including first-degree murder and armed robbery.