A deadly robbery in Lake County is now a double-murder after a second victim has died.

MOUNT DORA, Fla. - A man shot multiple times during an armed robbery of a Mount Dora convenience store has passed away after several days in the hospital. His wife had passed away at the scene. Now, police are now investigating the incident as a double homicide.

The shooting happened on Monday night at the T&N Market on North Grandview Street.

Police said that 47-year-old Minh Nguyen and 56-year-old Khiem Ba Trinh, known as Tina and Ken in their community, were shot multiple times during an armed robbery.

They said that Tina was pronounced dead at the scene. Ken was in critical condition at a hospital but unfortunately passed after the family said he was taken off of life support. 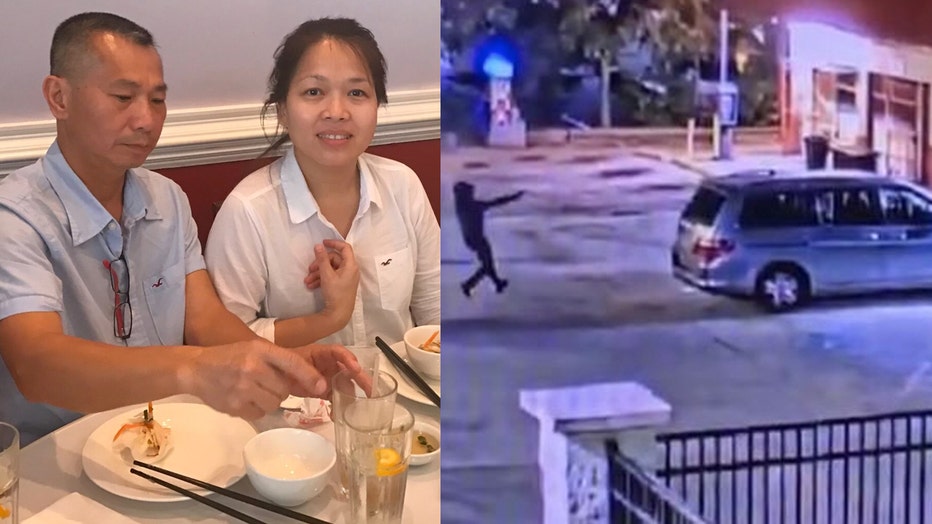 The suspect of the shooting remains at large and police are now investigating this as a double homicide.

"Ken Trihn had passed away as a result of injuries suffered on Monday evening. It is our deep-felt condolences to the family," said Interim Police Chief Brett Meade during a news conference on Thursday.

The couple was closing their store on Monday night when a person ran over and forced Ken, at gunpoint, into the store, shooting both and killing Tina.  A camera recorded the interaction outside the store and captured the moment the suspect fled.

"Him coming out with a bag he didn’t have before," Meade said.

Family members are trying to make sense of why this happened.

"If they want money, then just take it. Why do they have to kill them? They’re parents and they have kids. That makes me so angry," said Tina's cousin, Mai Reynolds.

The couple had two boys, one 18 and the other 12. Chief Meade said the family was loved by the community and that helps play a part in solving the crime.

"Everyone of them has a positive interaction with Ken and Tina. As a result of that, people that would not normally call in a tip, because it is so personal to them, because of their friendship, their interaction with this phenomenal couple, they’re helping us."

He added that there are several persons of interest. After 36 years as a law enforcement officer, he said this is the first time he has seen so many people come forward to help.

"I’ve never seen an outpouring of love, and commitment and dedication in finding this individual and love for the family that I’ve seen here. Personally, it reaffirms my faith."

Tina's funeral is reportedly set for Saturday. Details on Ken's have not yet been announced. A GoFundMe has also been established to help the family.

A $10,000 reward is being offered for information leading to an arrest. The suspect is said to be a man of thin build and was wearing all black and a black hoodie.