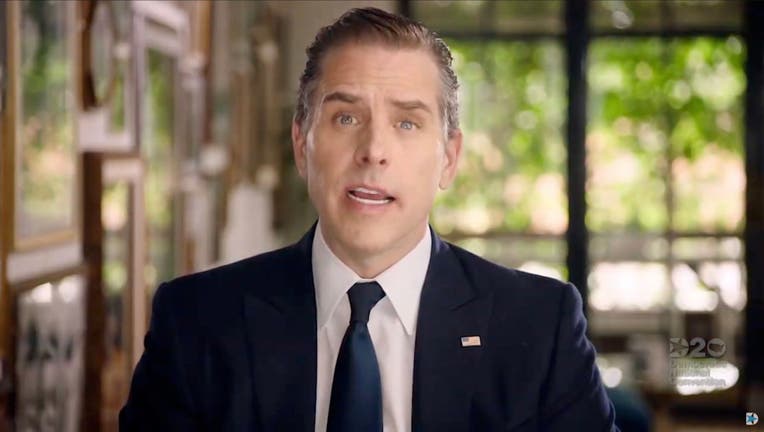 In this screenshot from the DNCC’s livestream of the 2020 Democratic National Convention, Hunter Biden, son of Democratic presidential nominee Joe Biden, addresses the virtual convention on August 20, 2020. (Photo by Handout/DNCC via Getty Images)

Committee Chairman Ron Johnson, R-Wis., told Fox News on Wednesday that the committee has been in touch with the person who provided the emails and was in the process of validating the information.

The emails in question were obtained by the New York Post and revealed that Biden’s son introduced the then-vice president to a top executive at Ukrainian natural gas firm Burisma Holdings less than a year before he pressured government officials in Ukraine to fire prosecutor Viktor Shokin, who was investigating the company.

"We regularly speak with individuals who email the committee’s whistleblower account to determine whether we can validate their claims," Johnson told Fox News. "Although we consider those communications to be confidential, because the individual in this instance spoke with the media about his contact with the committee, we can confirm receipt of his email complaint, have been in contact with the whistleblower, and are in the process of validating the information he provided.”

The Post report revealed that Biden, at Hunter’s request, met with Vadym Pozharskyi in April 2015 in Washington, D.C.

The meeting was mentioned in an email of appreciation, according to the Post, that Pozharskyi sent to Hunter Biden on April 17, 2015 — a year after Hunter took on his lucrative position on the board of Burisma.

“Dear Hunter, thank you for inviting me to DC and giving an opportunity to meet your father and spent [sic] some time together. It’s realty [sic] an honor and pleasure,” the email read.

An earlier email from May 2014 also showed Pozharskyi, reportedly a top Burisma executive, asking Hunter for “advice on how you could use your influence” on the company’s behalf, the Post reported.

Biden once famously boasted on camera that when he was vice president and spearheading the Obama administration’s Ukraine policy, he successfully pressured Ukraine to fire Shokin, who was the top prosecutor at the time. He had been investigating the founder of Burisma.

“I looked at them and said: I’m leaving in six hours. If the prosecutor is not fired, you’re not getting the money,” Biden infamously said to the Council on Foreign Relations in 2018.

Biden and Biden allies have maintained, though, that his intervention prompting the firing of Shokin had nothing to do with his son, but rather was tied to corruption concerns.

Biden repeatedly has claimed he’s “never spoken to my son about his overseas business dealings.”

In October 2019, Biden told the news-talk radio program “New Hampshire Today with Jack Heath” that he “never” discussed with his son "or any family member what they’re doing because, in fact, what happens if you did that, then it’s, 'Well, are you engaged and in any way helping?’ I never had a discussion with my son about it.”

Biden added that Hunter “did say at one point that it came out that he was on the board, I said, ‘I sure hope the hell you know what you’re doing, period.’”

Johnson's committee has been investigating Hunter Biden's foreign business dealings since 2019, and last month released an interim report on their monthslong probe into Hunter Biden’s role on the board of Burisma and his alleged “extensive and complex financial transactions.”

Johnson and Senate Finance Committee Chairman Chuck Grassley, R-Iowa, said their investigation has “faced many obstacles” from Democrats on their committees and that executive agencies “failed to comply with document requests.”

The chairmen added that “there remains much work to be done” in their probe. Hunter Biden is the son of the Democratic presidential nominee Joe Biden. His work background played a starring role in the Trump impeachment efforts earlier this year. He and his father have denied any wrongdoing related to his work.

The 87-page report stated that Obama administration officials “knew” that Hunter Biden’s position on the board of Burisma was “problematic” and that it interfered “in the efficient execution of policy with respect to Ukraine.”

“This investigation has illustrated the extent to which officials within the Obama administration ignored the glaring warning signs when the vice president’s son joined the board of a company owned by a corrupt Ukrainian oligarch,” the report’s executive summary stated.

Meanwhile, the Post reported Wednesday the emails were part of a trove of data recovered from a laptop which was dropped off at a repair shop in Delaware in April 2019.

The Post reported that other material turned up on the laptop, including a video, which they described as showing Hunter smoking crack while engaged in a sexual act with an unidentified woman, as well as other sexually explicit images.

The FBI reportedly seized the computer and hard drive in December 2019. The shop owner, though, said he made a copy of the hard drive and later gave it to former Mayor Rudy Giuliani’s lawyer, Robert Costello.

The Post reported that the FBI referred questions about the hard drive and laptop to the Delaware U.S. Attorney’s Office, where a spokesperson told the outlet that the office “can neither confirm nor deny the existence of an investigation.”

A lawyer for Hunter Biden did not comment on specifics, but instead told the Post that Giuliani “has been pushing widely discredited conspiracy theories about the Biden family, openly relying on actors tied to Russian intelligence.”

The Biden campaign did not immediately respond to Fox News’ request for comment.

Biden’s role on the board of Burisma and his business dealings emerged during the Trump impeachment inquiry in 2019.

Trump, during his now-infamous July 25, 2019, phone call with Ukrainian President Volodymyr Zelensky, pressed for Kiev to look into the elder Biden's role pressing for the ouster of a Ukrainian prosecutor who had been investigating the founder of Burisma.

Trump's pressure campaign against Ukraine prompted a whistleblower complaint, and, in turn, the impeachment inquiry.

The president’s request came after millions in U.S. military aid to Ukraine had been frozen, which Democrats cited as a quid pro quo arrangement.

Trump was acquitted on both articles of impeachment – abuse of power and obstruction of Congress – this past February.