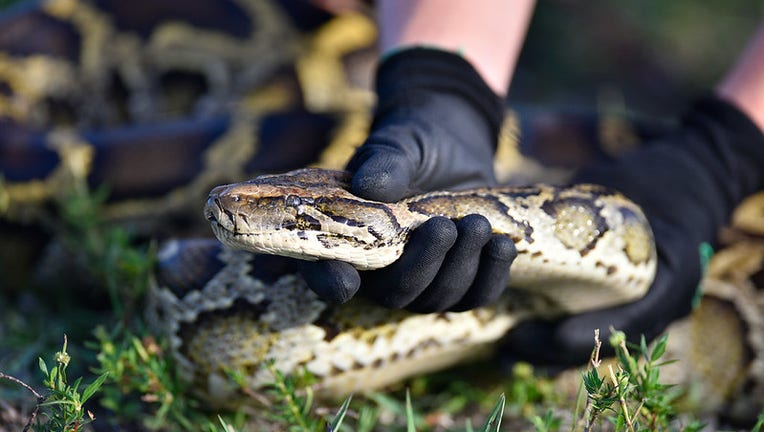 In an effort to curb the population of the Burmese python in Florida, hundreds of the invasive species were removed during the 2022 Florida Python Challenge.

The Florida Python Challenge drew in close to 1,000 participants from 32 states to help removes Burmese pythons from south Florida — and to compete for the $10,000 ultimate grand prize.

Imagine this: You're driving through a nature preserve and suddenly you spot something slithering across the ground. But, it's not something small that's slithering, it's actually an 18-foot, 104-pound snake. A trio of python hunters found the snake last week at Big Cypress National Preserve in South Florida.

The participants removed 231 Burmese pythons during the 10-day competition that was created to increase awareness about invasive species and the threats they pose to Florida's ecology.

The ultimate grand prize winner, Matthew Concepcion, removed 28 Burmese pythons, while Dustin Crum won the $1,500 grand prize for the longest python removed at a length of 11 feet and 0.24 inches.

Back in August, a trio of python hunters found an 18-foot, 104-pound snake on Highway 41 near Big Cypress National Preserve in South Florida.

Burmese pythons are not native to Florida and negatively impact native species. They are found primarily in and around the Everglades ecosystem in south Florida where they prey on birds, mammals and other reptiles. A female Burmese python may lay 50 to 100 eggs at a time. Since 2000, more than 17,000 wild Burmese pythons have been removed from the state of Florida.

Anyone can remove and humanely kill pythons any time on private lands with landowner permission and on 25 Commission-managed lands throughout south Florida.

The public can also help control invasive species by reporting nonnative fish and wildlife to the Florida Fish and Wildlife Conservation Commission (FWC) Invasive Species Hotline at 888-IVE-GOT1 (888-483-4681), by reporting sightings online at IveGot1.org or by downloading the IveGot1 smartphone app.