The BART worker who saved a man's life was very humble about his extraordinary feat. He pulled a drunk man who stumbled onto the tracks back on the platform just in the nick of time. A BART supervisor said it's nothing in the manual and that John O'Conner, the hero, acted on his own natural talent and from the heart.

OAKLAND, Calif. - You've all seen the video by now— a courageous BART employee lifts an intoxicated man who fell onto the track way back on to the platform right as a train approaches at Oakland's Coliseum Station.

We spoke to the humble hero, John O'Connor, who got very emotional about what happened. He said he didn't even have time to think, but that he'd like the man he rescued to pay it forward.

"I just looked and thought, 'He's not going to make it. I've got to do something," said O'Connor. O'Connor, a supervisor at the transit agency, said he wouldn't call himself a hero, but he's just about the only one who wouldn't. "I don't think I did anything special. That's what I'm here for."

Surveillance video captured what happened Sunday on the plaftorm just as the Raiders game let out.

A man holding a cell phone fell onto the track. The train can be seen fast approaching, but O'Connor, who sees it all going down, is fast to react.

"He came from here and just went into the track. When I looked up, I saw the train coming and I just grabbed him. There wasn't a lot of time to think. In my mind it all went down in slow motion," he said.

Later a passenger took video of O'Connor and the man he rescued hugging and posted it on Twitter. 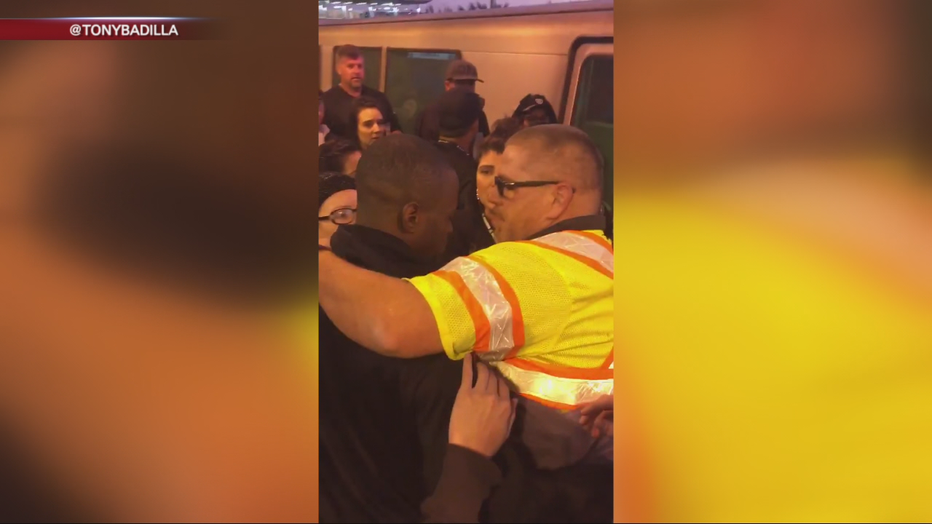 "After I got him out, I was a little angry. We told people to stay back. When I saw him later, I said to pay it forward."

The unidentified man who was rescued was described as in his twenties. He was taken to the hospital, but not for any injuries connected to the fall.

O'Connor said he's not sure where he found the physical strength to pull the man out.

"I don't know if I could do it now. He didn't feel heavy at the moment," O'Connor said.

BART employees do get safety training, but nothing that could have prepared O'Connor for what happened Sunday.

"It's not in the training manual. John acted on talent. he's a great employee. He works from the heart.

BART said incidents of somene accidentally falling onto the tracks is rare, less than once a year on average, but they are considering a pilot plan to install barriers. Officials said that plan is five years away.

Until then, wayward passengers may have to rely on guardian angels, such as O'Connor.

"I feel awkward being called a hero. It's what we are supposed to do."