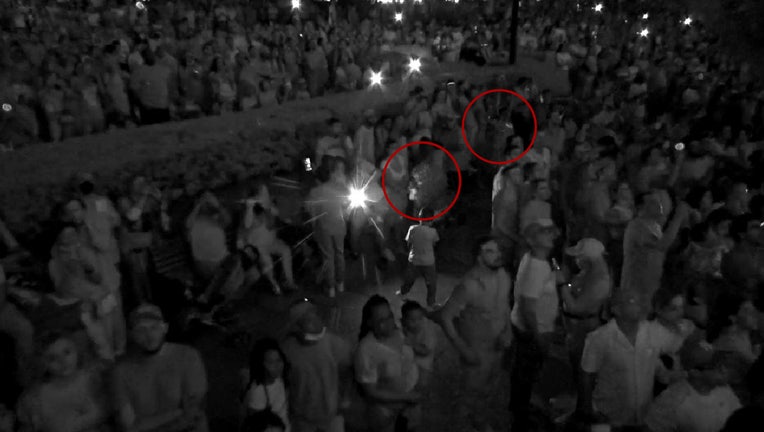 ORLANDO, Fla. - The Orlando Police Department is asking people to share their photos and videos from Monday night's fireworks show at Lake Eola Park, as they investigate what prompted thousands of people to suddenly run away and stampede away from the park and into the surrounding streets.

Orlando Police Chief Orlando Rolon said during a Tuesday morning press conference that there is no evidence that gunfire or a shooting took place Monday night, as some people who ran away suspected happen. Police said it appears that some sort of noise, possibly fireworks nearby, caused someone or a group of people to leave, which then prompted others to flee.

Police also released surveillance video that appears to show the moment people started to run away. In the video, two people in hoodies appear to jog through the crowd. Minutes later, people start running away, cowering to the ground, and jumping over bushes.

Orlando police are asking for information after a noise in the crowd was mistaken for gunshots at the fireworks show at Lake Eola on July 4th.

To be clear: the two people have not been named persons of interest or suspects and may have had nothing to do with the situation, Rolon said, but detectives would like to talk with them.

Chief Rolon also encouraged people who attended the event to send their videos to the police, as they may have knowingly or unknowingly captured what may have caused the panic.

HOW TO SHARE VIDEOS FROM LAKE EOLA WITH ORLANDO POLICE

Orlando police have created a website where people can send in photos or videos from Monday night's incident at Lake Eola. They're asking anyone who was there and shot video to share it with police who help determine what happened.

Here is how to submit a video: