WASHINGTON - A House panel advanced a decades-long effort to pay reparations to the descendants of slaves by approving legislation Wednesday that would create a commission to study the issue.

It's the first time the House Judiciary Committee has acted on the legislation. Still, prospects for final passage remain poor in such a closely divided Congress. The vote to advance the measure to the full House passed 25-17 after a lengthy and often passionate debate that stretched late into the night.

The legislation would establish a commission to examine slavery and discrimination in the United States from 1619 to the present. The commission would then recommend ways to educate Americans about its findings and appropriate remedies, including how the government would offer a formal apology and what form of compensation should be awarded.

The bill, commonly referred to as H.R. 40, was first introduced by Rep. John Conyers, D-Mich., in 1989. The 40 refers to the failed government effort to provide 40 acres (16 hectares) of land to newly freed slaves as the Civil War drew to a close.

"This legislation is long overdue," said Rep. Jerrold Nadler, the Democratic chairman of the committee. "H.R. 40 is intended to begin a national conversation about how to confront the brutal mistreatment of African Americans during chattel slavery, Jim Crow segregation and the enduring structural racism that remains endemic to our society today."

The momentum supporters have been able to generate for the bill this Congress follows the biggest reckoning on racism in a generation in the wake of George Floyd’s death while in police custody.

Still, the House bill has no Republicans among its 176 co-sponsors and would need 60 votes in the evenly divided Senate, 50-50, to overcome a filibuster. Republicans on the Judiciary Committee were unanimous in voting against the measure.

Rep. Jim Jordan of Ohio, the ranking Republican on the committee, said the commission’s makeup would lead to a foregone conclusion in support of reparations.

Supporters said the bill is not about a check, but about developing a structured response to historical and ongoing wrongs.

"I ask my friends on the other side of the aisle, do not ignore the pain, the history and the reasonableness of this commission," said the bill’s sponsor, Rep. Sheila Jackson Lee, D-Texas. 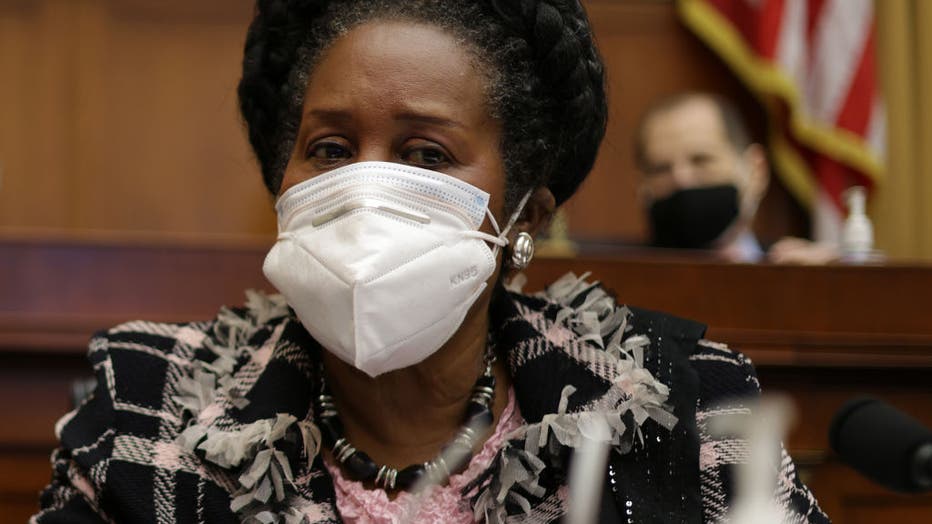 FILE - U.S. Rep. Sheila Jackson Lee, D-Texas, listens during a hearing before the Subcommittee on the Constitution, Civil Rights, and Civil Liberties of the House Judiciary Committee at Rayburn House Office Building on Capitol Hill March 18, 2021 in

Other Republicans on the committee also spoke against the bill, including Rep. Burgess Owens, an African American lawmaker from Utah, who said he grew up in the Deep South where "we believe in commanding respect, not digging or asking for it." The former professional football player noted that in the 1970s, Black men often weren't allowed to play quarterback or, as he put it, other "thinking positions."

But Democrats said the country's history is replete with government-sponsored actions that have discriminated against African Americans well after slavery ended. Rep. David Cicilline, D-R.I., noted that the Federal Housing Administration at one time refused to insure mortgages in Black neighborhoods while some states prevented Black veterans of World War II from participating in the benefits of the GI Bill.

"This notion of, like, I wasn't a slave owner. I've got nothing to do with it misses the point," Cicilline said. "It's about our country's responsibility, to remedy this wrong and to respond to it in a thoughtful way. And this commission is our opportunity to do that."

Last month, the Chicago suburb of Evanston, Illinois, became the first U.S. city to make reparations available to its Black residents for past discrimination and the lingering effects of slavery. The money will come from the sale of recreational marijuana and qualifying households would receive $25,000 for home repairs, down payments on property, and interest or late penalties on property in the city.

Other communities and organizations considering reparations range from the state of California to cities like Amherst, Massachusetts; Providence, Rhode Island; Asheville, North Carolina; and Iowa City, Iowa; religious denominations like the Episcopal Church; and prominent colleges like Georgetown University in Washington.

Polling has found long-standing resistance in the U.S. to reparations to descendants of slaves, divided along racial lines. Only 29% of Americans voiced support for paying cash reparations, according to an Associated Press-NORC Center for Public Affairs Research poll taken in the fall of 2019. Most Black Americans favored reparations, 74%, compared with 15% of white Americans.

President Joe Biden captured the Democratic presidential nomination and ultimately the White House with the strong support of Black voters. The White House has said he supports the idea of studying reparations for the descendants of slaves. But it’s unclear how aggressively he would push for passage of the bill amid other pressing priorities.

Members of the Congressional Black Caucus brought up the bill during a meeting with Biden at the White House on Tuesday.

"We're very comfortable with where President Biden is on H.R. 40," Jackson Lee told reporters after the meeting.

RELATED: 'Why not now?' for slavery reparations, House panel is told