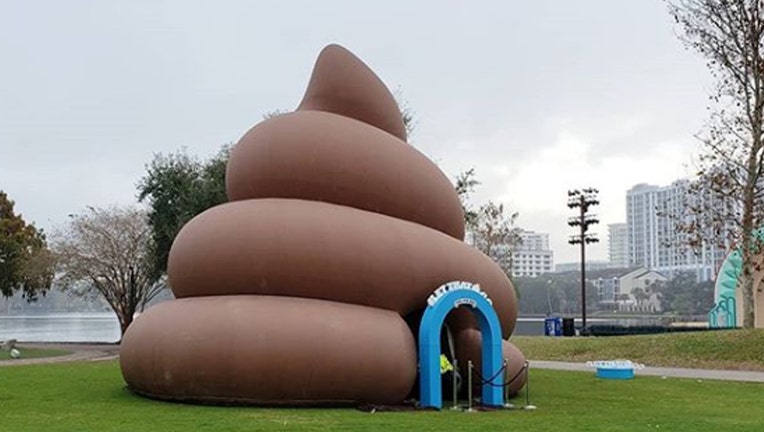 Photo Courtesy of The Bungalower

ORLANDO, Fla. - Did you spot the giant poop inflatable at Lake Eola?

The company 'Poo-Poourri' brought the fecal inflatable to Lake Eola on January 24 to promote their product, the 'Poo-Pourri Before-You-Go Toilet Spray.' The inflatable will remain there until 10 p.m. on January 26.

"For over a decade, Poo~Pourri Before-You-Go Toilet Spray has been taking the stink and shame out of letting **** go—literally," the Poo-Poourri website states. "Now, they’re teaching the world how to let go of a different kind of crap—toxic thoughts."

The company encourages people to use the 30-foot inflatable poop inflatable to let go of toxic thoughts and feel at peace. On their event page for their stop in Orlando, they said that the inflatable is a "mind-blowing, transformative, fully immersive 360° experience that pushes out the bad ****, makes room for the good ****, and leave you feeling like THE ****."

The Giant Poo Experience will travel to several other cities in America, including LA, New York, Boston, Chicago, Miami and, Poo-Pourri’s hometown, Dallas.