This footage filmed by Scotty Powell shows rainwater filling a sinkhole in Morganton, North Carolina, during a storm on Oct. 7, 2021. Credit - Scotty Powell via Storyful

MORGANTON, N.C. - Heavy rainfall in North Carolina flooded parts of the state this week, including an "infamous" sinkhole that formed last year and could be potentially be worsened by recent storms.

Video recorded by meteorologist Scotty Powell shows rainwater filling a sinkhole in Morganton, a city located about 75 miles northwest of Charlotte. The sinkhole opened up in November of 2020 following heavy rain from Tropical Storm Eta and grew from additional rain on New Year’s Day, according to local news outlet WCNC-TV.

"The infamous sinkhole in Morganton is about full of water from all the heavy rain today," Powell wrote in an Oct. 7 post on Twitter.

The massive sinkhole is located near the local U.S. Post Office, which is a "heavily trafficked area," WCNC reports.

A sinkhole forms when water dissolves the rock beneath the surface soil, which can often be limestone, according to the National Geographic Society. Sinkholes occur naturally, especially where there is "abundant rainfall," it says.

The threat of heavy rainfall was forecast to continue through Friday in the Carolinas with some locally heavy downpours possible, according to the National Weather Service. By Saturday night into Sunday morning, forecasters said the threat of heavy rain and gusty winds could increase near North Carolina’s coast. 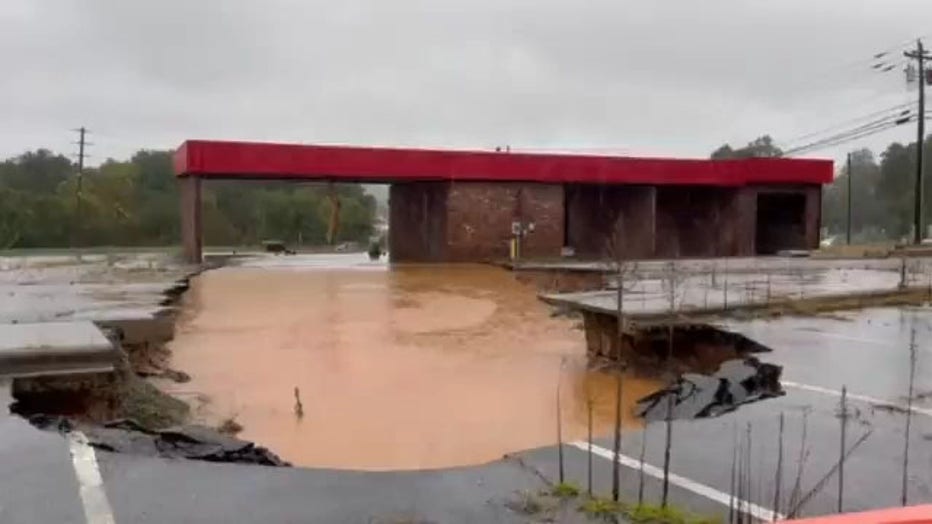 A screengrab from the video shows the sinkhole on Oct. 7, 2021, in Morganton, North Carolina. Credit: Scotty Powell via Storyful

Nearby in McDowell County, officials issued a state of emergency on Thursday after receiving more than 7 inches of rain in some areas. The round of strong storms caused "life-threatening flash flooding," prompting several water rescues at impassable roads and flooded homes, officials said.

Meanwhile, heavy rain from a stalled weather front wreaked havoc in other parts of the South this week. Flash flooding in Alabama left entire communities underwater and killed at least four people — including a 4-year-old girl, officials said.

Dozens of people had to be rescued Wednesday night in central Alabama, where the National Weather Service said as much as 13 inches of rain fell. A south Alabama town temporarily lost its main grocery store when a creek came through the doors of the Piggly Wiggly.

Near Alabama’s coast, heavy rains caused sewage to bubble out of underground pipes.