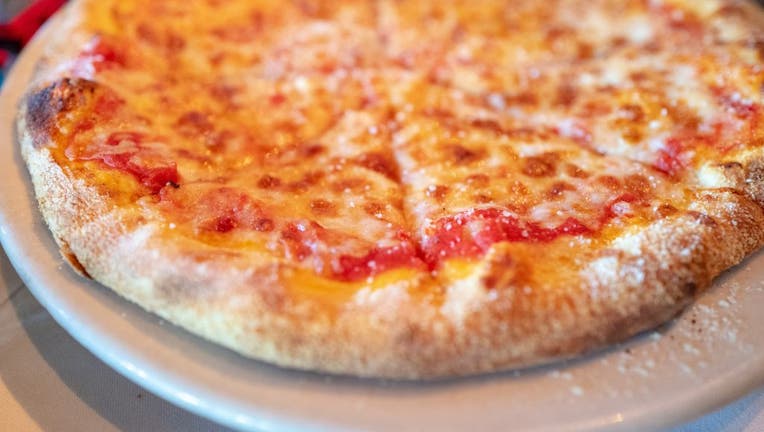 FILE Close-up of cheese pizza at a restaurant in Danville, California, on Aug. 9, 2021. (Photo by Gado/Getty Images)

Monday, March 14 is National Pi Day, the annual celebration of the mathematical constant Pi — which is approximately equivalent to 3.14.

Pi is the ratio of a circle’s circumference to its diameter but also serves as another reason to eat pizza and pie.

There are several companies offering discounts and freebies to celebrate the day. Some include customers having to sign up for a rewards club or printing a coupon.

Here are some of the best deals for National Pi Day 2022:

Participating 7-Eleven and Speedway stores are serving whole pizzas for $3.14. The Pi Day deal is available in stores through the 7Rewards loyalty program or can be ordered on the 7NOW delivery app.

Blaze Pizza rewards members — both new and existing — can score any 11-inch pizza for $3.14 on Pi Day.

Caulipower, which makes frozen pizzas with a cauliflower crust, is offering one free Caulipower product per person up to an $11.99 maximum value for Pi Day to those who download this coupon. Customers must sign in via email.

Goldbelly, a curated online shop for regional and artisanal foods throughout the U.S., is offering up to 30% off some of its best pies around in honor of Pi Day and ships nationwide. The deals include blueberry pies from Main, key lime pies straight from the Florida Keys and more.

Honey Baked Ham is offering $3.14 off its Apple Caramel Walnut Pie in honor of Pi Day. Customers must show this coupon and the offer is only valid at participating locations.

Marco’s Pizza is offering a medium one-topping pizza for $3.14 with the purchase of any large or x-large pizza at menu price. The deal is valid for those who order online or through Marco’s Pizza app with the code "PIDAY2022," according to RetailMeNot — and only at participating locations.

Papa John’s customers who buy a large pizza at regular menu price cann get a large one-topping pizza for $3.14 at participating locations, according to the official Pi Day website.

Those who sign up for Sbarro's Slice Society rewards can receive a free NY XL pizza slice with the purchase of a drink — at any time. They’ll also receive a surprise on their birthday.

See more regional deals being offered across the country on PiDay.org.