According to investigators, 52-year-old David Sierra was working as a substitute alongside a full-time teacher on Wednesday morning.

When the teacher stepped away from her desk to make copies, police said Sierra got into a verbal argument with a student. 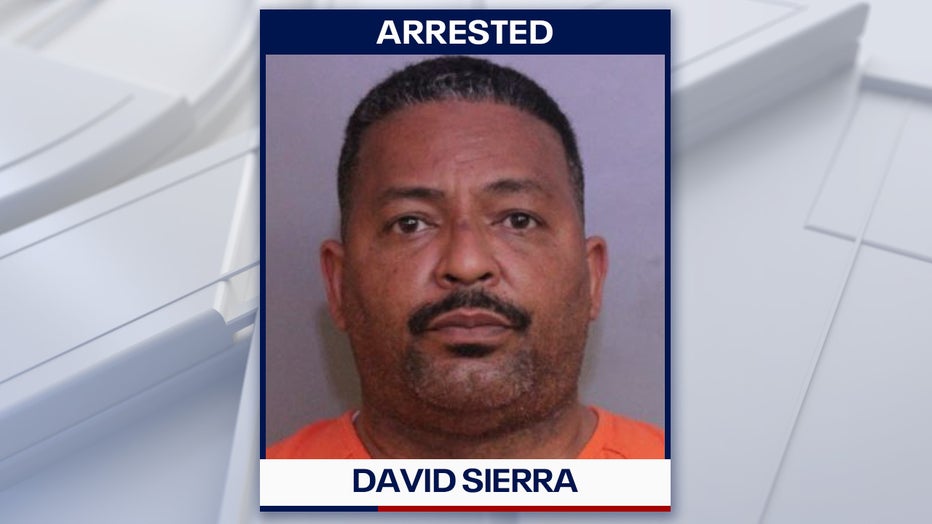 The teacher said Sierra stood over the student, "one inch" from his face, and yelled obscenities at him while belittling him in front of the class.

The teacher ran back into the room and attempted to deescalate the situation, but said Sierra continued to "verbally attack" the student.

"As a reactionary defense mechanism, the student got out of his seat to try and put a little distance between himself and the substitute because he was literally feeling and smelling the substitute's breath as the substitute continued to berate him," Haines City police said.

That's when witnesses said Sierra forced the student against a wall, grabbed him in the neck and shoulder area and kneed him multiple times in the face.

The female teacher tried to rescue the student by pulling him away from Sierra, and both fell to the ground. Police said Sierra continued to attack the student as he lay on the floor.

When a second student tried to pull Sierra off of his classmate, the substitute teacher allegedly grabbed him.

"The second student, fearing he was going to be the focus of the suspect's fury, punched the suspect," police said.

The student ran out of the classroom with Sierra chasing after him. He eventually ran back into the classroom, where the full-time teacher quickly locked the door after him.

Police said Sierra tried to open the door but was unsuccessful.

"Educators are expected to be deescalating, stabilizing forces in our schools," said Haines City Police Chief Jim Elensky. "In this case, we had one who lived up to those standards and one who was instead, the antagonist. I commend the teacher for having the courage to step in to protect a student from someone nearly three times her size."

Investigators said Sierra was immediately terminated by Polk County Schools, where he'd been working as a long-term sub at Boone Middle School since Jan. 16. According to police, Sierra had no prior disciplinary actions.

Sierra is charged with two counts of battery and one count of disrupting a school function.

"We are shocked and appalled by the incident that has occurred at Boone Middle School. As educators, we are held to a higher standard. We must treat every child entrusted to our care with the utmost compassion and respect. We must represent our profession with dignity and pride. We must set an example for our students, our colleagues and our community at all times. Any failure to do so simply will not be tolerated. Period. My staff will move forward with immediately terminating this employee, and we will report the incident that occurred at Boone to the Office of Professional Practices. To my employees and to my community, be assured that Polk County Public Schools has zero tolerance for this kind of behavior. Employees who engage in anything less than professional behavior will face serious consequences. We thank the Haines City Police Department for their assistance in addressing this situation."