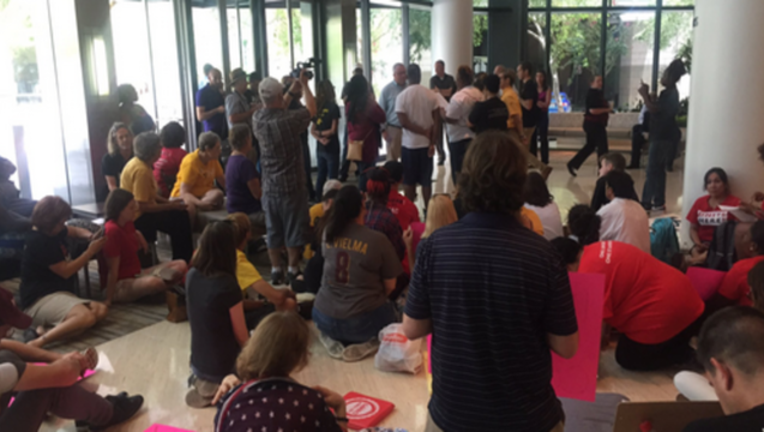 ORLANDO, Fla. (AP) - A month after the Orlando nightclub shooting, dozens of gun control advocates started a 49-hour sit-in near Sen. Marco Rubio's office to remember the 49 victims. They sang songs, held signs that said "#SitForThe49" and laid 49 red roses on white paper with the names of each victim.

Nine hours in, police cut the demonstration short Monday night by arresting 10 protesters who refused to leave the building when it was closing. The sit-in was part of a larger fight for new gun control measures, but so far the calls for change have yielded no results.

The protest was reminiscent of a 26-hour sit-in Democrats staged on the U.S. House floor last month. A GOP-written gun and anti-terror bill has stalled in Washington during this election year and it's unclear when the House will consider the measure.

Gunman Omar Mateen opened fire at Pulse during "Latin Night" on June 12 in a rampage that left 49 victims dead and injured 53 at the gay nightclub in the worst mass shooting in modern U.S. history. Mateen, who pledged allegiance to the Islamic State during a call with police dispatchers amid a three-hour standoff, died in a hail of police gunfire after police stormed the venue.

Protester Fausto Cardenas, a University of Central Florida student, said Pulse had been a "safe space" for him and other members of the LGBT community.

"To not feel safe in a space like that was a very impactful thing for us," said Fausto, who wasn't arrested. "We want to hold people accountable."

The protesters said they were targeting Rubio because of the Florida Republican's opposition to same-sex marriage and the support he has gotten from the National Rifle Association.

Rubio, a former GOP presidential candidate, was in Washington this week, but his state director listened to the protesters for about five minutes Monday.

"Sen. Rubio respects the views of others on these difficult issues, and he welcomes the continued input he is receiving from people across the political spectrum," Rubio spokeswoman Kristen Morrell said in an email.

The arrested protesters face misdemeanor trespass charges. They were released on $250 bond each.

Ida Eskamani, who was arrested, said that even though sit-in was over, she and other activists will urge voters to call and tweet Rubio, demanding that he act on gun legislation and measures to end discrimination.

"The line has been drawn and you are either standing with us or not," Eskamani said Tuesday, hours after being released from jail. "The heat is continuing to be turned up."

The protesters said they wanted all politicians to reject contributions from the NRA, and they wanted tighter restrictions on assault weapons, as well as universal background checks for all gun purchasers.

"It's not enough for politicians to offer platitudes," said Rasha Mubarak, an official with the Council on American-Islamic Relations in Florida. "We demand a comprehensive platform for gun control."

As part of the shooting anniversary, Orlando area officials on Tuesday helped move 49 white crosses, which served as one of the three major memorials to the Pulse victims, from Orlando Regional Medical Center to the Orange County Regional History Center, where the crosses will be preserved.

An official memorial will be designed as a garden near the hospital. Hospital officials said Tuesday that four patients from the Pulse shooting were still being treated, including one in critical condition.

Meanwhile, U.S. Rep. John Mica planned to hold a hearing in Washington on Friday on why federal authorities didn't deem terrorism as a high enough threat factor in Orlando for the region to receive federal money for preventing and responding to terrorist threats. Almost $590 million in grants were distributed this year by the U.S. Department of Homeland Security to metro areas, including Miami, Fort Lauderdale and Tampa, but Orlando was left off the list.

The parents of one of the Pulse victims, Maria and Fred Wright, were in Washington, asking lawmakers to pass any gun control legislation. Their son, Jerry Wright, a Walt Disney World worker, was among the slain.

"Forty-nine people were killed just because they were out trying to have fun," said Maria Wright. "We are losing our freedom to get together and have fun because our government isn't doing anything. I'm asking them to please do something before we have more children killed."