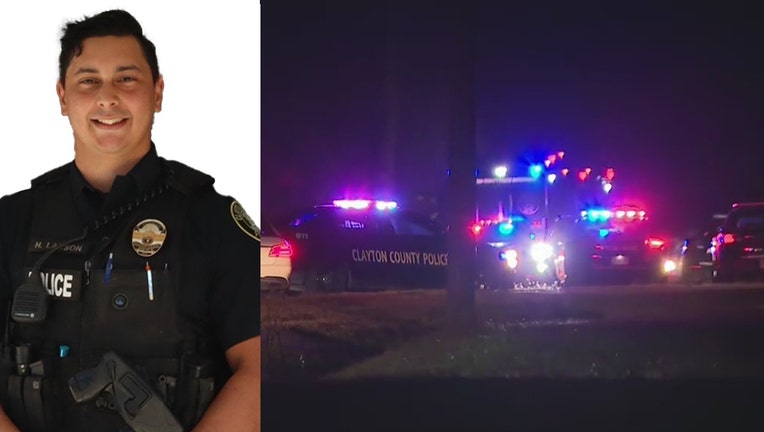 REX, Ga. - One Georgia police officer was killed and another was wounded Tuesday night in a Clayton County incident that authorities said left a total of four people dead, including the suspect.

The slain officer was identified as Field Training Officer Henry Laxson, the third Georgia police officer killed in the line of duty in the past month and the eighth this year, the Atlanta Journal-Constitution reported.

Clayton County police were called about 8:40 p.m. to a home in Rex, about 20 miles southeast of downtown Atlanta, in response to "multiple calls" about gunfire and domestic violence, Clayton County police Chief Kevin Roberts told reporters in a Wednesday morning news conference around 2:30 a.m. ET.

When police arrived in the area, they were met by a 12-year-old boy who had been shot in the face, Roberts said. But before being transported to a hospital, where he was listed in critical condition early Wednesday, the boy led police to a residence where a gunman was located, the chief said.

MORE NEWS: Oxford High School shooting: What we know about the victims

The suspect immediately fired on the officers with a handgun, sending the officers to flee for safety while the suspect fled to the back of the residence, Roberts said. There, he was confronted by other officers who were approaching the home from the rear, he said.

During that exchange of gunfire, two officers were shot, one of them suffering fatal wounds, the other a wound to his hand, the chief said. As police returned fire, the suspect was struck and killed, the chief added.

"These men and women do an honorable job every day," the chief said, "and it's unfortunate that we have to make these reports time and time again. My heart aches for every police officer and their family that go through these type of things. These things just shouldn't happen."

Police later found two women dead among "multiple victims" inside the home, according to the chief.

Dozens of police officers were seen gathering outside Grady Memorial Hospital following the shooting, Atlanta's WSB-TV reported, adding there was no immediate information about the others who were wounded or about possible suspects.

Ashli Lincoln of WSB posted video from the area in which gunshots can be heard in the background.

The shooting occurred near the intersection of Macon Highway and Interstate 675, according to the Atlanta Journal-Constitution.