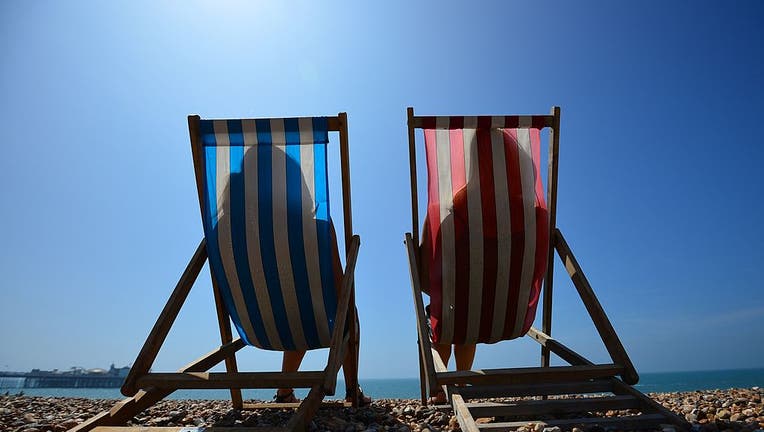 People relax in deck chairs on the beach in Brighton on July 18, 2014, as parts of the country were expected to experience the hottest day of the year so far and the Met Office issued a heatwave alert for southern England and the Midlands. AFP PHOTO

Every summer brings along the promise of starry nights, beach vacations and young romance.

No matter what you’ve got on tap for the summer ahead, Tubi has a variety of films to get you into the hot-weather mood.

From a high school graduation road trip in "Summerland" to the more serious "Redhook Summer" from Spike Lee, all the following films and more are free to stream on Tubi.

While staying with his preacher grandfather, a sheltered teenage boy watches controversy unfold on the streets of Brooklyn during his summer vacation.

A group of friends vacations at a summer house, full of love and secrets, except for the one they left behind, after a near-fatal accident.

Teenager Jake is happy living in Chicago, until his father dies and his mother uproots them to a small beach town where his estranged grandfather lives. With no friends and no knowledge of surfing, Jake has nowhere to turn and nothing to do- until he meets Cody, a local surf shop owner, who reveals that Jake's grandfather is a surfing legend.

Things get rowdy when the lights go out in this gonzo comedy about a summer camp director who reunites campers onsite,10 years later, to save it.

This is the story of Miguel, left by his mother in Puerto Rico to stay with his grandparents. The summer of ‘79 is when he searches for his dream and finds true love instead. Surfing, cars, motorcycles, parties, trying to fit in with the local crowd and taking care of his younger sister, Miguel has his hands full.

In rural Wales, four boys roam free, until a tragic, life-shattering crime sets them apart from the world of adults, and loyalty and friendship rule.

Relive the summer of 1976 in this glam-infused British musical from the producer of "Billy Elliott", starring Minnie Driver and featuring songs by David Bowie, The Beach Boys and more.

In the 1960s, friends Sandy, Boo, Scollop, and Robbie head to a beach north of Sydney with the idea to throw a bachelor party of sorts for Sandy, celebrating his imminent wedding.

RELATED: Add cult classics like ‘Donnie Darko,’ ‘Best in Show’ to your list of must-see movies, free to stream on Tubi