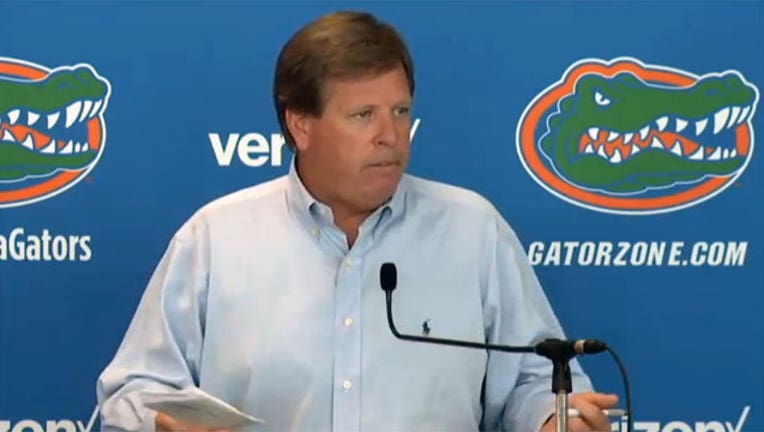 The school announced the suspension at a news conference Monday and said it will appeal.

The eighth-ranked Gators are not facing a forfeiture of any wins. But the suspension could cost Grier 25 percent of his college eligibility, making the redshirt freshman a junior when he returns next October.

Grier, who gained 20 pounds in his first 18 months on campus, failed a drug test in the last two weeks. Grier said Monday he took an over-the-counter supplement, but did not specify which one.

"I did not check with the medical staff before taking it," Grier said during an emotional, minute-long apology. "I really hope that people can learn from this, learn from my mistake. I'm really, really sorry to everyone. Just really sorry."

According to NCAA rules, Grier will remain suspended during the appeals process. But he can practice with the team while he's ineligible.

The Gators play at No. 6 LSU on Saturday night, and sophomore Treon Harris will make his first start since the season opener.

Coach Jim McElwain said Grier made a mistake that could have been avoided by talking to the team's medical staff.

"You and I can both go get it," said McElwain, who said he learned of the suspension Sunday. "Anyone in this room can. Anybody in this country can. The mistake is, and the lesson for whoever out there, make sure — just like we educate our guys now — you check with your medical staff before you put anything in your body."

McElwain also did not identify what Grier took.

"Doesn't matter. Cough medicine. You have to know what you're putting in your body. Will admitted he didn't do it. I think that speaks for him. He's not putting it on anybody else. He's a stand-up guy. That's how he played the game and plays the game. He'll be back."

Grier apologized to teammates before doing the same to Florida fans publicly.

"When you have an opportunity to sit down and visit with him and see the remorse and the sorrow, that's hard," McElwain said. "That's really hard. As a coach, but more so as a human, to see someone go through that. It's not easy. But he knows we're here for him.

Grier and the Gators have been one of the most surprising teams in the country in their first year under McElwain, the former Colorado State coach and Alabama assistant. The Gators (6-0, 4-0 Southeastern Conference) already have matched last year's regular-season win total and have a commanding lead in the league's Eastern Division race.

Harris will be tasked with helping them stay there.

Harris started the opener and split snaps with Grier in the second week against East Carolina. He has not thrown a pass since. He is 19 for 27 for 269 yards and two touchdowns.

He played nine games as a freshman last season, completing 45 percent of his passes for 1,019 yards, nine touchdowns and four interceptions.

Former Vanderbilt receiver Josh Grady will serve as the backup against the Tigers (5-0, 3-0).

"We have two really good quarterbacks and have a package for another one," McElwain said. "This is not an excuse. It happened. Things happen in life, and if you want to use it as an excuse, so be it. But that's not what we're going to do. We're going to have a great week of practice, we're going to play our tails off against one of the best teams in the country on their turf and this out to be a blast, man.

"This ought to be a celebration, this game, for what this is all about. This is fun. This is why we do it. If you don't like this, get out of it, man."