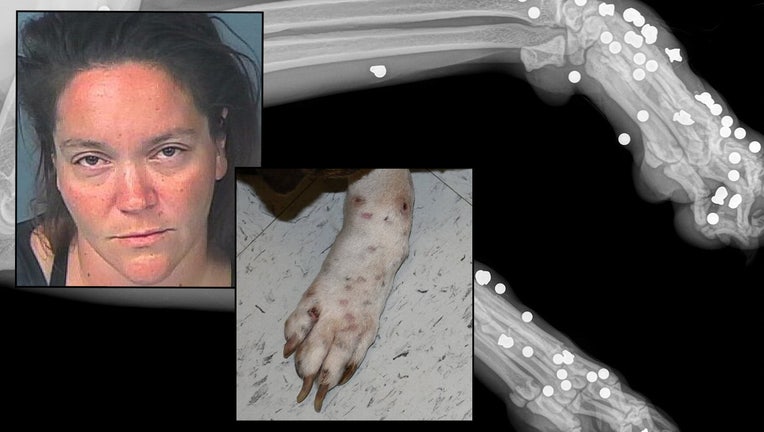 Jamie Lynn Kujawa, 37, was arrested Tuesday after an investigation by the Hernando County Sheriff's Office.

Last month, deputies responded to a home on Hollyhock Lane in Spring Hill after reports of a woman possibly shooting her own dogs with a BB gun.

"A witness advised he was working outside when he heard the sound of a BB gun being fired followed by yelps of dogs being hit," the sheriff's office said. The witness reportedly heard the BB gun fire 15 times within 45 minutes.

An animal enforcement officer examined the dogs and noted that there were several injuries and scaring on their feet and paws, the sheriff's office said. Kujawa reportedly told the officer the dogs had recently been involved in a fight. When asked if the dogs had been vaccinated, they say the owner could not provide proof.

Over the course of the next week, animal enforcement officers routinely checked on the condition of the dogs. Kujawa reportedly told an officer she was financially unable to care for the dogs and surrendered them to Hernando County Animal Services.

The dogs were examined by a veterinarian, who reportedly found a total of 173 BBs and lead pellets between the two dogs. The projectiles were found throughout the dogs legs, torsos and heads, the sheriff's office said.

"Investigation revealed Kujawa used a gas-powered BB gun to shoot the dogs when they attempted to dig under the property fence to get out of her yard. Kujawa advised she had been shooting the dogs for approximately two months."

A third dog, three cats, a ferret, and a bird were also removed from the home.