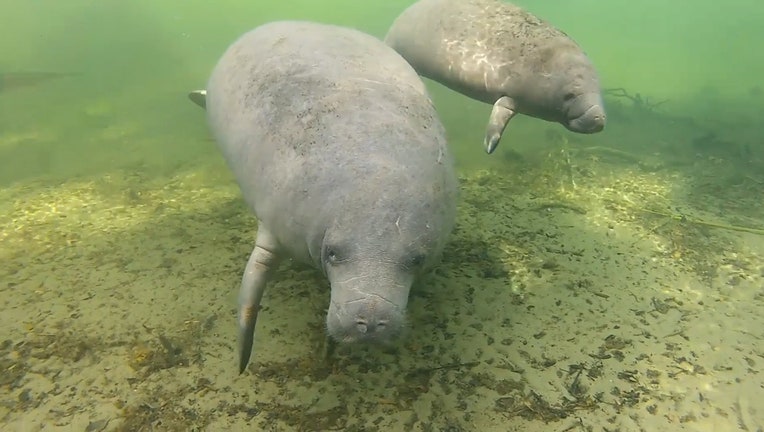 TALLAHASSEE - State wildlife experts say they think efforts to feed lettuce to starving manatees in the Indian River Lagoon are showing signs of providing relief after a record number of deaths last year of the sea cows.

But data to back up that contention won’t be known until the cold weather season is over. And a concern remains that Florida will face a final cold snap in the coming weeks.

Still, Florida Fish and Wildlife Conservation Commission Executive Director Eric Sutton remained upbeat Wednesday about the future of manatees in Florida waters after more than 96,000 pounds of lettuce have been provided to the ambling creatures since Dec. 14 at Florida Power & Light’s Cape Canaveral Clean Energy Center.

"The question is, is it making a difference? Is it helping the manatees?" Sutton said at the start of a commission meeting at the Tampa Convention Center. "And it's kind of a complicated response. Simply put, I've had to think it has. And we're just going to have to get through this season and analyze the data to see to what extent it has helped the population. … But I feel like this effort has mollified it (the problems) somewhat."

The commission took the unusual step of approving efforts to feed manatees to offset a repeat of 2021, when a record 1,100 manatees died in Florida waters. Many of the deaths were due to starvation because of declining seagrass beds that are prime foraging areas, particularly in the Indian River Lagoon. Poor water quality and algae blooms helped lead to the seagrass problems.

Typically, feeding wildlife in such a manner would be considered taboo among wildlife professionals, and the commission has repeatedly issued advisories for the public not to also feed manatees.

Sutton noted that manatees initially didn’t start eating the lettuce, as they are used to looking down to eat seagrass. But they changed their eating habits after they caught on about where the food was.

"It took them a while to figure that out, and that behavior kind of spread amongst the population," Sutton said.

Through the first six weeks of this year, at least 261 manatees died in Florida waters, which is slightly behind the 2021 pace.

Commission Chairman Robert Spottswood said efforts to help manatees remain a long-term process, with the primary focus needing to be improvement of the quality of the water and a "fast-forward" of seagrass restoration.

"This is not this is not a system that we can recover in a year or two," Spottswood said. "This is a system that's going to take a decade to recover."

The House proposal would cover 12 new full-time employees for research, monitoring, rescue and response to manatee issues, including an expansion of the network of specialized facilities that treat injured and distressed manatees.

The Center for Biological Diversity, Defenders of Wildlife and the Save the Manatee Club contended in the lawsuit that the U.S. Fish and Wildlife Service did not take final action on a 2008 petition to revise what is known as a "critical habitat" designation for manatees. The lawsuit describes such designations as key "for ensuring the survival and effectuating the recovery of imperiled species such as the Florida manatee."

The federal agency has not filed an initial response.