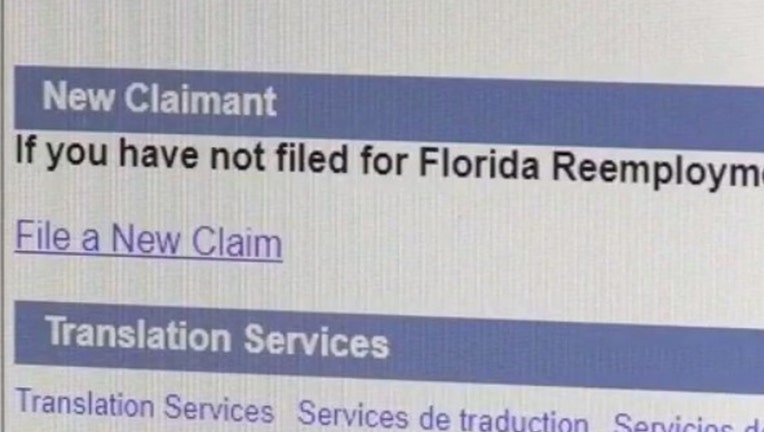 ORLANDO, Fla. - Jacqueline Gonzalez considers herself one of the lucky ones. Weeks after being laid off from a South Florida sports bar that was shut down because of the coronavirus, the 32-year-old single mom was finally was able to complete an online unemployment application.

But even so, the out-of-work bartender has received no confirmation of how much of the maximum $275 per week in compensation she’ll receive, or when the checks will start arriving. And there is no one to ask. She’s called multiple times, but the call always goes unanswered.

“Every day, you’re trying to log in to see what your status is. Some days you can get in, and some days you don’t,” Gonzalez said, referring to the Department of Economic Opportunity’s website. “It’s a waiting game.”

Gov. Ron DeSantis said Friday that he’s added 2,000 state workers to try to sort through the growing numbers of unemployment claims. He said the department must verify the Social Security number, employer and other information for each person filing for unemployment.

The Department of Economic Opportunity also has increased it’s computer system’s capacity so that it can handle the approximately 120,000 simultaneous website users it has been seeing recently — about double the peak usage in recent weeks. Officials said the agency received 3.8 million calls last week, 50% more than all of last year.

“This is a shock like we’ve never seen before, so we’re shifting as many resources to this as we can,” DeSantis said Friday at a news conference.

He said unemployment offices have received more than 640,000 claims since March 15, in addition to 12,000 paper applications that arrived in the mail through FedEx, which offered to print out and send applications for people.

For now, Gonzalez said she’s managing to get by using some savings to pay bills. She and her 11-year-old daughter live with her mother in Miami Lakes and her mother, a school teacher, is helping with the child’s virtual schooling. But she’s worried her savings won’t last long.

“There is no other form of income for us right now. ... We can’t work from home,” she said. “We’re just sitting here. Bills are racking up.”

As the coronavirus began to spread in the state in early March, she consulted with fellow therapists about whether to continue seeing patients in their homes. While some of her patients were still willing to seek treatment, she worried about putting them at risk with so little known about the virus.

“We’re not staying home because we’re lazy,” she said. “We’re staying home so people don’t die. This is a very real thing. I’ve never been in a place where I could possibly not pay my own bills. It’s awful.”

RELATED: Record 16.8 million have sought US jobless aid since virus

Olson said she has tried — unsuccessfully — to file for unemployment since March 16. She’s tried logging on to the website early in the morning and at various other times during the day, but has been stymied every time. Her next plan is to try late at night, when hopefully fewer people will be on the system.

“It’s been hours and hours a day, hundreds of phone calls. … I’ve never been able to get through,” Olson said.

Finally, on Wednesday, she reached an actual person. She was ecstatic — until she was told the system was down while being revamped.

As a new small business owner, Olson said she doesn’t have a lot of savings. She’s put many of her bills on hold while waiting to get both her state unemployment check and the federal aid that has been approved by Congress and President Donald Trump.

Michelle Chason, a self-employed energy healer in Tallahassee, has experienced the same frustrations.

“You get to a certain point and it asks you to put your pin number in,” she said of the unemployment website. “You make a new pin then you go to log in and then it sends you right back to do it all over again. I now have my driver’s license totally memorized because of having to enter it so many times.”

On Thursday, she used the agency’s new mobile site and was able to start a claim by entering her name, Social Security number and some of her work history.

Chason blames Republican Sen. Rick Scott, who as governor modified the unemployment system in a way that critics say makes it harder for Floridians to collect unemployment.

“I think it’s criminal,” Chason said. “To purposely set it up to make it difficult where people will get frustrated and not file is evil.”

Scott has dismissed the criticism, but DeSantis, also a Republican, has acknowledged that it’s broken and needs fixing. Even before the pandemic-induced crunch, he said, it still took about three weeks from the time someone applied for benefits to receive a first check.