How safe is the COVID-19 vaccine?

Some people are hesitant about whether they'll get the vaccine when their turn comes. FOX 13's Aaron Mesmer talked to medical experts about how safe and effective these vaccines have proven to be.

TALLAHASSEE, Fla. - Thousands of hospitals and nursing homes across Florida are preparing for the next shipment of COVID-19 vaccines after FDA approved the emergency use of Moderna's shot.

The head of the Food and Drug Administration said late Thursday that his agency was moving quickly to authorize the second vaccine to fight the pandemic, hours after the shot won the key endorsement of a government advisory panel. The approval was announced a few hours later.

FDA Commissioner Stephen Hahn said in a statement that regulators have communicated their plans to drugmaker Moderna, which co-developed the vaccine with the National Institutes of Health.

The announcement came after a panel of FDA advisers, in a 20-0 vote, ruled that the benefits of the vaccine outweighed the risks for those 18 years old and up.

Gov. Ron DeSantis said once the FDA approves it for emergency use, the state can expect 367,000 doses. Like the Pfizer vaccine, Moderna's requires a second follow-up dose and each vaccine has its own narrow window of time for a patient to get that second dose. 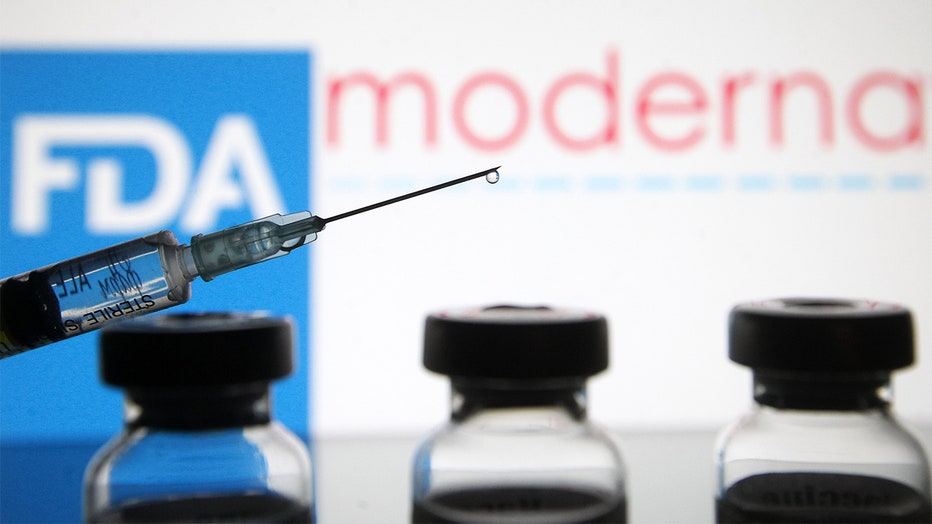 In this photo illustration, vials and a medical syringe seen displayed in front of the Food and Drug Administration (FDA) of the United States and Moderna biotechnology company's logos. FDA finds the COVID-19 vaccine. (Photo Illustration by Pavlo Gon

Moderna’s vaccine would greatly expand access to hospitals and nursing homes because it doesn’t have the same super-cold storage requirements as the Pfizer vaccine, so significantly more facilities will be able to properly store it on-site.

It’s promising news as the certainty of future shipments of Pfizer’s vaccine has been called into question. On Wednesday, DeSantis said production issues had put the next two shipments of the Pfizer vaccine -- some 450,000 doses -- on hold.

That’s a claim Pfizer’s CEO has denied. Pfizer said it shipped all doses required and the company is waiting in the federal government for further instruction.

Like the Pfizer vaccine, Moderna’s clinical trials showed it to be 94% effective at protecting against coronavirus.

The campaign kicked off earlier this week with the first vaccine OK’d in the U.S., developed by Pfizer and BioNTech. Moderna’s shot showed similarly strong effectiveness, providing 94% protection against COVID-19 in the company’s ongoing study of 30,000 people.

A second vaccine is urgently needed as coronavirus infections, hospitalizations and deaths climb to new highs ahead of the holidays. The U.S. leads the world in virus totals, with more than 1.6 million confirmed cases and more than 310,000 reported deaths.

Moderna’s vaccine uses the same groundbreaking technology as Pfizer-BioNTech’s shot. Most traditional vaccines use a dead or weakened virus, but both of the new vaccines use snippets of COVID-19’s genetic code to train the immune system to detect and fight the virus.

The two new vaccines will hopefully help "break the back of the pandemic," said Dr. Arnold Monto of the University of Michigan, who chaired the panel.

Thursday’s review came days after reports of apparent allergic reactions to the Pfizer-BioNTech vaccine in two Alaska health workers. One person had a severe reaction, including shortness of breath, the other had less serious side effects, including lightheadedness.

While the two vaccines use the same technology, they’re not identical, cautioned Moderna chief medical officer Dr. Tal Zaks. In particular, some of the lipids, or fats, used to coat the two vaccines are different.

"I would not necessarily assume" that any reactions would be the same, he said.

About 600 coronavirus vaccines arrived at the Moffitt Cancer Center this morning. Hundreds of doctors and nurses were able to get their initial shot.

The FDA found no severe allergic reactions in Moderna’s data but flagged a slightly higher rate of less serious side effects — rash, hives, itching — among participants who got the vaccine, compared with those receiving a dummy shot.

With the addition of Moderna’s vaccine, government officials project that 20 million Americans will be able to get their first shots by the end of December and 30 million more in January.

Hundreds of millions of additional shots will be needed to eventually vaccinate the general public, which isn’t expected until the spring or summer. The government’s Operation Warp Speed program has orders for 200 million doses of Moderna’s vaccine.

That’s on top of 100 million doses of the Pfizer-BioNTech vaccine. Officials are negotiating to purchase more doses of that vaccine and there are more vaccines in the pipeline.