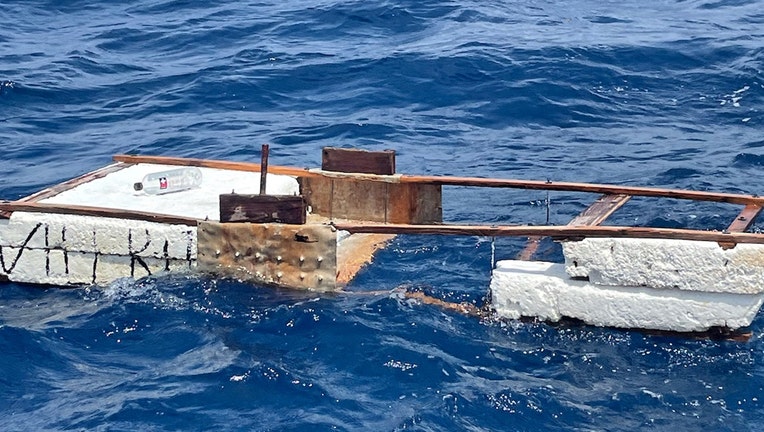 MIAMI - The U.S. Coast Guard in Miami rescued one Cuban refugee adrift off the coast of Florida, as three other migrants are believed to have died after attempting the sea passage aboard a makeshift raft.

Crews from the U.S. Coast Guard Station Miami Beach and Miami-Dade Fire Rescue saved one man "after a good Samaritan came across him in Biscayne Bay Saturday," U.S. Coast Guard Southeast said in a statement Sunday, releasing a photo showing a raft made of wood and Styrofoam.

The owner of the vessel Spread Out reported to Sector Miami watch-standers at approximately 1 p.m. Saturday that he came across a man on a makeshift raft in the vicinity of Fowey Rocks.

MORE NEWS: Ida: At least 1 dead, more than a million customers without power in Louisiana

The man said he left from Cuba, was adrift for 10 days, and the three other people with him had died, authorities said.

"The South Florida maritime community has some of the best people who assist others while on the water, whether that's towing a boat or helping out a migrant with food, water, and bringing them aboard if necessary," Tuxhorn continued. "Most importantly, this community knows to call the Coast Guard in these situations, because if you don't, you may be part of a human smuggling investigation for just doing the right thing."

U.S. Customs and Border Protection was notified, the statement added.