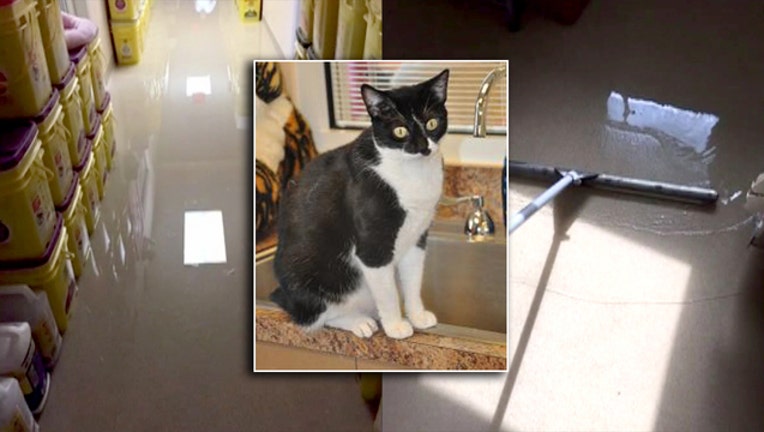 Cat pictured is Maddie and is adoptable at the Florida Humane Society. Maddie may or may not have been involved in the alleged flooding.

According to Florida Humane Society's president, Carol Ebert, the water was running out the back door of the shelter.  At first they thought it was a burst pipe, but now they're blaming the cats.  Turns out, the water came from a faucet in a cat room, which they think the kitties turned on.

The water damaged, cabinets, walls, as well as cat food and kitty litter being stored in the hall. It also caused mold around the facility.

Ebert said the cats were safely up in their beds for about 17 hours, avoiding the water running below them before someone came in.

The cats have been moved while the renovation is being done.

"We figure sometime in the early afternoon it must have come on, and it flooded every room here on the cat side -- all 8 rooms that we have -- the cat rooms, the exam rooms and the quarantine rooms," Ebert said.

The shelter asking the community for help. It needs $5,000 for renovations and to replace the food and litter that was damaged.

To help, go to floridahumanesociety.org.