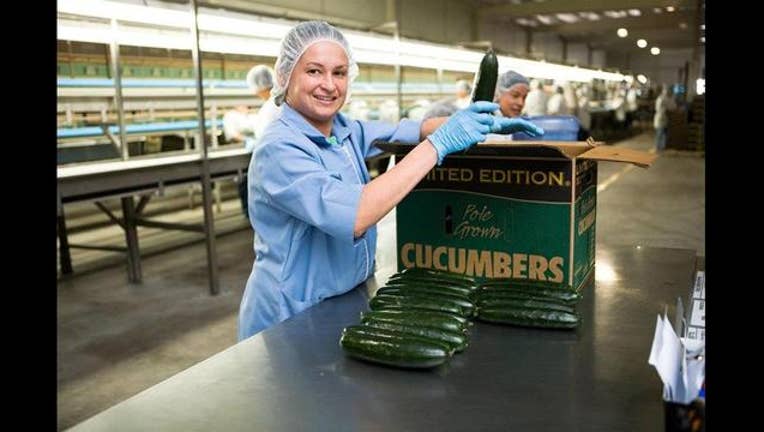 SAN DIEGO (AP) — A California company is recalling its cucumbers after a salmonella outbreak that has sickened 285 people in 27 states and killed a San Diego woman.

Health officials say the cucumbers are the likely cause of hundreds of illnesses since July 3 and the Aug. 17 death of a 99-year-old woman.

Half the people who became ill are under 18 years of age.

The company said it is working with health officials to determine if its products are the source of the outbreak, and it undertook the voluntary recall out of caution.

"The safety and health of the consumers who buy our products have always been the highest priority for us," Dave Murray, a partner in the company, said in a phone interview. "I bring our produce home to my family, that's how much I believe in the produce we buy, ship and sell. We've invested millions to make sure our food safety systems are effective and up to date."

Washington state health officials say nine residents have been sickened from the cucumber-related salmonella outbreak. Three cases have been reported in Oregon, according to the federal Centers for Disease Control.

In Idaho, health officials say eight residents have gotten sick. One of them was hospitalized but has recovered. Idaho officials are investigating six other possible cases linked to the outbreak.

No one in Washington state has been hospitalized. Those cases are in Clark, King, Kitsap, Pierce, Thurston and Yakima counties.

A total of 66 cases of salmonella linked to the cucumbers have been reported in six Arizona counties. About 75 percent of the cases are children ages 17 and under.

Some people have been hospitalized, but there haven't been any reported deaths.

State Department of Health Services officials say of Arizona's 66 cases, 49 are in Maricopa County, 10 in Pima County, one in Apache County and two cases each in Coconino, Pinal and Yuma counties.

Previous salmonella outbreaks have been linked to products ranging from to chicken to chia powder.