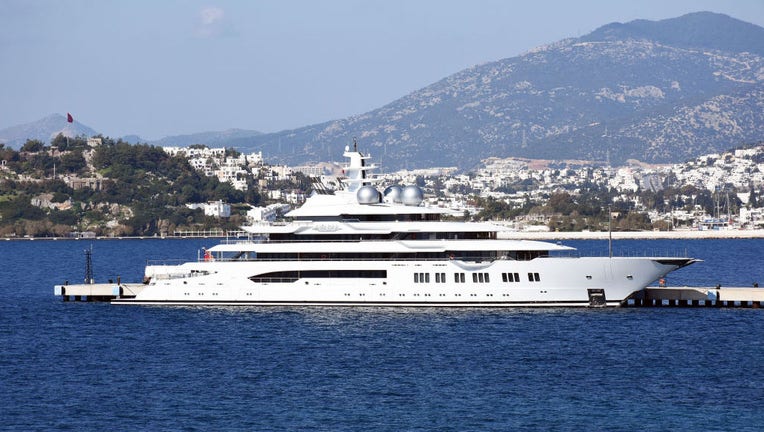 FILE-The 106m-long and 18m-high super luxury motor yacht Amadea, one of the largest yachts in the world is seen anchored at a pier in Turkey in February 2020. (Osman Uras/Anadolu Agency via Getty Images)

WELLINGTON, New Zealand - A judge in Fiji has ruled that U.S. authorities can seize a Russian-owned superyacht — but has put a hold on his order until at least Friday while defense lawyers mount a challenge.

The yacht Amadea — worth $325 million — had earlier been stopped from leaving the South Pacific nation because of its links to Russia. That order will stand for now, preventing U.S. authorities from taking the yacht to Hawaii or elsewhere.

A question remains over which of two Russian oligarchs really owns the Amadea, with only one of them facing sanctions. There are also questions about how far U.S. jurisdiction extends into Fiji.

RELATED: Russian oligarch's superyacht stuck in Norway because no one will sell it fuel

Suva High Court Justice Deepthi Amaratunga on Tuesday granted an order allowing the U.S. to seize the superyacht after the U.S. had earlier filed a warrant. But the judge has also allowed for a pause while defense lawyers put together their challenge.

The judge's next decision in the case will come on Friday, when he will decide whether to continue to put a hold on the yacht's seizure pending a formal appeal by the defense.

The U.S. Justice Department in March announced the creation of a team of federal agents and prosecutors to pursue wealthy Russians or those aiding Russia’s invasion of Ukraine. The team, called Task Force KleptoCapture, was set up to seize assets belonging to oligarchs with the aim of pressuring Russia to end the war.

The U.S. claims the real owner of the superyacht Amadea is Suleiman Kerimov. The economist and former Russian politician was sanctioned by the U.S. in 2018 for alleged money laundering and has faced further sanctions from Canada, Europe, Britain and other nations after Russia invaded Ukraine.

RELATED: US seizes yacht owned by oligarch with close ties to Putin

Kerimov made a fortune investing in Russian gold producer Polyus, with Forbes magazine putting his net worth at $14.5 billion.

But defense lawyers claim the real owner is Eduard Khudainatov, the former chairman and chief executive of Rosneft, the state-controlled Russian oil and gas company. Khudainatov currently does not appear to face any sanctions, unlike many oligarchs and people with close ties to Russian President Vladimir Putin who have been sanctioned since the war began.

Defense lawyers have claimed in court that Millemarin Investments Ltd. is the legal owner of the vessel and that the company is linked to the real, or beneficial, owner, Khudainatov. But U.S. authorities have claimed that behind all the various fronts, the real owner is Kerimov.

On April 19, after the yacht had sailed into Fiji from Mexico, the High Court in Suva ordered that the Amadea not leave Fiji until the merits of the U.S. warrant to seize the vessel were determined. Perhaps reflecting the question over ownership, the court later ordered Fijian prosecutors to amend an original summons, which named just Kerimov, to also include Millemarin Investments Ltd. as a second respondent to the case.

For now, the yacht continues to sit in a Fijian harbor with its crew of about 25 rotating on and off the vessel, while a police officer remains on board to ensure it stays put.

According to Boat International, the Amadea is 106 meters long and was built in 2017. It features a stainless steel albatross that extends off the bow and weighs more than 5 tons, a live lobster tank in the galley, a 10-meter (33-foot) pool, a hand-painted Pleyel piano and a large helipad.

The U.S. Embassy in Suva earlier said in a statement that the U.S. was acting with allies and partners around the world to impose costs on Russia because of its "war of choice."

"We continue to ratchet up the pressure on Putin’s oligarchs and we are working with allies and partners to go after corrupt gains from some of the individuals closest to Putin, no matter where they are held around the world," the embassy said.