The state had sent 100 National Guard soldiers to the nation’s capital Tuesday at the request of Secretary of Defense Mark Esper to assist in quelling violence over the death of George Floyd in police custody in Minneapolis.

“While I fully support everyone’s right to free speech, Guardsmen and women are sworn to protect all of us, regardless of race, ethnic background, or religion,” DeWine said. 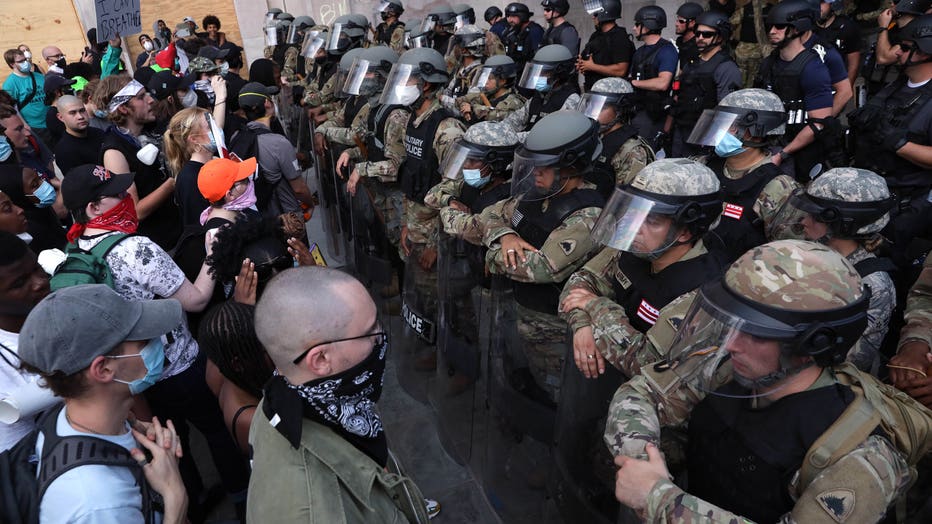 Demonstrators stand in front of National Guard and other law law enforcement officers during a peaceful protest against police brutality and the death of George Floyd, on June 3, 2020 in Washington, D.C. (Photo by Alex Wong/Getty Images)

Floyd, a black man who died after a Minneapolis officer pressed his knee into Floyd's neck for several minutes even after he stopped moving and pleading for air, has galvanized protesters of racism and police brutality across the country.

The governor added that the Ohio National Guard and state’s Department of Public Safety fully cooperating with the federal agency in its investigation into the trooper’s online activity.

The identity of the guardsman has not been released. DeWine said he has been suspended from all missions at this time and it’s likely he will be ousted from the National Guard.