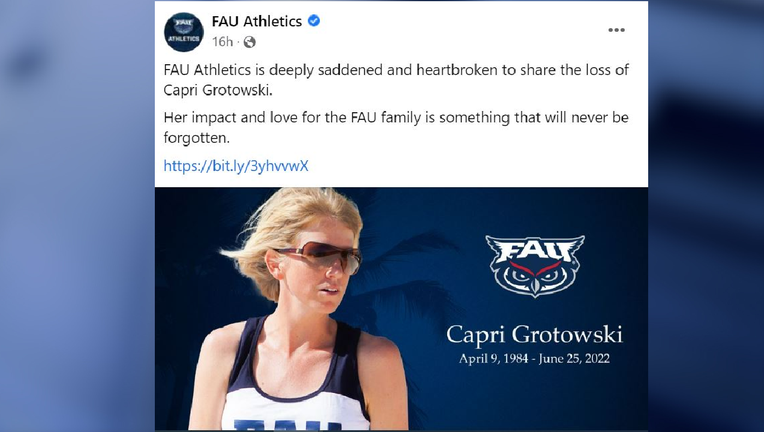 Students and staff at Florida Atlantic University are mourning the loss of its women's beach volleyball head coach, Capri Grotowski.

The university's volleyball team announced her passing Saturday on Twitter. FOX Sports said the 38-year-old had been battling breast cancer for nearly a decade.

"The FAU family has suffered a terrible loss with the passing of Coach Grotowski," FAU President John Kelly said in an online statement. "We are grateful for Capri's service to the university and all the lives she influenced throughout her life and career. Our thoughts are with the Grotowski family at this difficult time."

Grotowski was a native of south Florida where she graduated from Lake Worth High School and Keiser University, according FAU Sports' website. She was tapped as FAU's head beach volleyball coach in 2014 and reportedly quickly built the program that was perennially ranked in the Top 25.

The teams past season was the most successful of her career with the FAU Owls, with her team going 23-12, getting an NCAA tournament win and Grotowski being named Conference USA's coach of the year, according to FOX Sports.