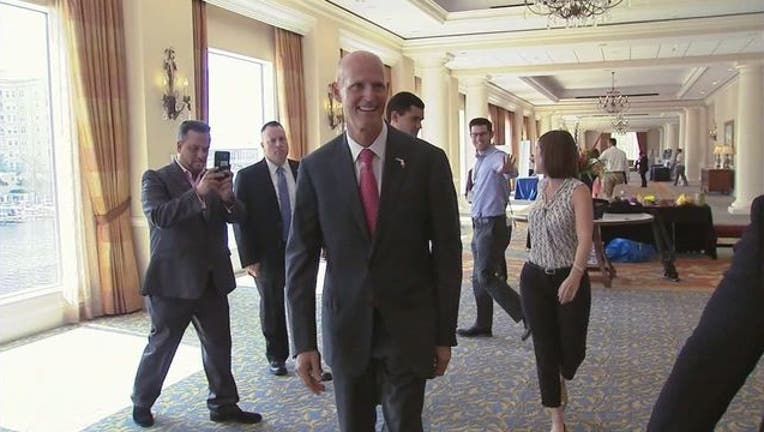 TALLAHASSEE (NSF) - Calling Gov. Rick Scott's likely bid for the U.S. Senate an "open secret" would be a misnomer --- there's no secret there, open or otherwise.

Scott continues to sprint across the state for official events that easily double as campaign swings --- this week alone, he's done a pair of ceremonial bill signings and two events to highlight law-enforcement pay raises he signed into law last month.

The only mystery is when the governor will make his 2018 plans official. Observers say there's no hurry.

"Because he's potentially the biggest name in that race on the Republican side, he can take his time, really," said Aubrey Jewett, a political science professor at the University of Central Florida.

Scott has repeatedly brushed off questions about when he might run, saying the public is "tired of long campaigns."

He also has personal experience to draw on: Scott announced his first run for governor as a virtual unknown in April 2010 before beating Attorney General Bill McCollum in an August GOP primary and Democrat Alex Sink in the general election that November.

This time, Scott would probably need to start a little bit sooner.

"He can probably push it into late in the fall. Obviously, he is running already," said Rick Wilson, a Republican strategist.

The governor began laying the groundwork for a possible campaign months ago. He has kept intact his first fundraising committee, “Let's Get to Work,” which has raised more than $11.5 million since Scott won re-election in 2014.

At the federal level, Scott has announced he would chair the “New Republican” super PAC, saying the goal of the committee "is to make the Republican Party Great Again" --- part of an overall Scott theme of tying himself closely to President Donald Trump.

In addition to trips across the state, Scott has traveled to Washington, D.C., and continues to raise his profile on national issues.

On Monday, Scott held a "Venezuelan Freedom Rally" in Miami to slam the authoritarian regime of President Nicolas Maduro.

"Today, as hundreds of people rallied together, a clear message was sent to Maduro and his gang of thugs: the movement will not be silenced --- freedom and democracy will thrive in Venezuela," Scott said in a statement released by his office Monday.

Democrats have also shown they have no doubt that Scott is running. The Democratic Senatorial Campaign Committee has hammered the governor repeatedly over the past few months. On Wednesday, they slammed "Self-Serving Scott's self-promotional press tour" on law-enforcement pay raises, saying Florida officers still make less than many counterparts in other states.

"Rick Scott's self-serving agenda has taken Florida to the bottom of the nation in household income and wages --- and under Scott even Florida's brave law enforcement officers make less than almost anywhere else in the country," said David Bergstein, a spokesman for the committee.

U.S. Bill Nelson, the Democratic incumbent who Scott would face next year, has also taken a few subtle and not-so-subtle jabs at the governor.

Still, no formal announcement seems to be in the works.

After being governor since January 2011, Scott also lacks one of the key reasons for an early announcement --- making sure voters, and particularly campaign contributors, know a candidate's name.

Scott has held off longer than his predecessor, former Gov. Charlie Crist, who announced in May 2009 that he would seek a U.S. Senate seat the following year.

But Crist also faced something Scott does not, so far: a credible primary challenger. In the 2010 U.S. Senate race, former state House Speaker Marco Rubio drummed Crist out of the Republican Party and then went on to win a three-way general election campaign.

For now, no other high-profile Republican has made serious noise about challenging Scott for the Senate nomination if he wants it.

"I don't know that him announcing earlier is going to scare anyone off who's not already scared off," Jewett said.

"You have to put your toe in the water at some point," he said, "or you attract other people into the game."