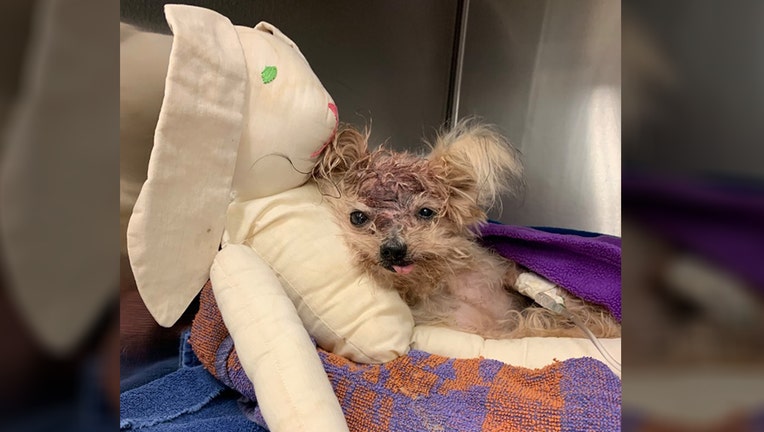 Authorities are trying to find out how Pringles ended up beaten and thrown in a trash can. ( Pennsylvania SPCA )

PHILADELPHIA - A senior dog that was left with a traumatic brain injury after allegedly being beaten by her owners and thrown into the trash has died.

The Pennsylvania SPCA made the announcement on social media that Pringles had passed away while fighting for her life.

"It is with the heaviest of hearts that we share the news that our sweet Pringles passed away yesterday," the shelter wrote on Facebook. "While we are all shattered by this, we hope that we can all find comfort in the fact that she did not die in a trash can scared and alone, but instead was surrounded by love, the best medical treatment available, and the support of so many in the city of Philadelphia and far beyond."

The elderly Yorkshire Terrier was found on Oct. 3 by a passerby in the 1800 block of North Taylor Street. The person reportedly heard sounds coming from a trash can and found the little dog. She was transported to the Pennsylvania SPCA for treatment and was listed critical condition. Little Pringles died just days later.

"While Pringles is no longer with us, our fight to find justice for her continues. Pringles was discarded like a piece of trash but fought to be found despite her injuries. In the short time that we knew her, she captured the hearts of many and her fighting spirit encouraged us all that perhaps a miracle was possible and she would recover. That was not to be, and while today we mourn, we will keep fighting - for Pringles."

Shelter officials said they have identified Pringles' owners and are continuing to investigate the incident.