CHICAGO - Researchers released a nutritional index this week aiming to inform guidelines and help Americans achieve healthier and more environmentally stable diets. The index ranked foods by minutes gained or lost off healthy life per serving, with processed meats and sugary drinks among the biggest offenders.

Findings included over 5,000 foods in the U.S. diet classified by health burden and environmental impacts.

"We use the results to inform marginal dietary substitutions, which are realistic and feasible," authors wrote. "We find that small, targeted, food-level substitutions can achieve compelling nutritional benefits and environmental impact reductions." 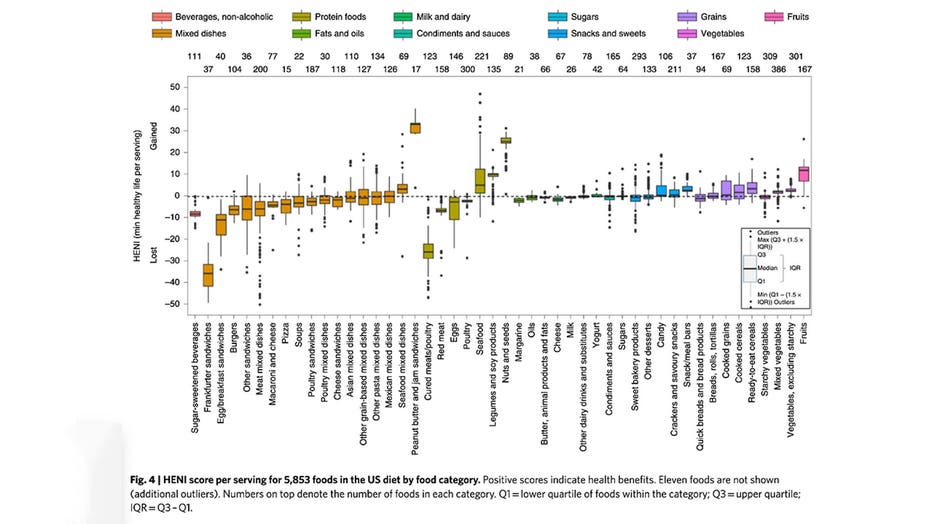 The foods studied ranged from 74 minutes lost to 80 minutes gained per serving. Sugary drinks, hotdogs, burgers and breakfast sandwiches were linked with most minutes of healthy life lost, whereas fruits, non-starchy and mixed vegetables, ready-to-eat cereals and cooked grains were associated with the largest gains.

More specifically, researchers found that consuming one 85-gram serving of chicken wings translated to 3.3 minutes of life lost, owing to sodium and harmful trans fatty acids, while a beef hotdog on a bun resulted in some 36 minutes lost "largely due to the detrimental effect of processed meat," study authors wrote. What’s more, peanut butter and jelly sandwiches were associated with a positive increase of 33 added minutes.

Foods like salted peanuts, baked salmon and rice with beans were also associated with positive gains between 10 to 15 minutes.

"Previous studies investigating healthy or sustainable diets have often reduced their findings to a discussion of plant-based versus animal-based foods, with the latter stigmatized as the least nutritious and sustainable," the study reads. "Although we find that plant-based foods generally perform better, there are considerable variations within both plant-based and animal-based foods that should be acknowledged before such generalized inferences are warranted."

"In agreement with previous studies, this suggests that nutritionally beneficial foods might not always generate the lowest environmental impacts and vice versa," study authors wrote.

Finally, researchers found that swapping 10% of daily caloric consumption from beef and processed meat for fruits, vegetables, nuts, legumes and certain seafood could reap significant health benefits, with the team citing a gain of some 48 minutes per person per day and a 33% smaller dietary carbon footprint.