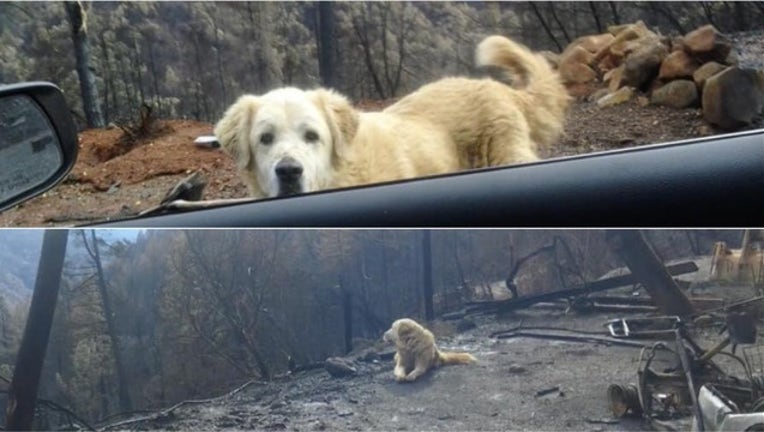 Madison the dog was found on his owners burned down Paradise property nearly a month after the Camp Fire forced the family to evacuate. (Photo: Andrea Gaylord via K9 Paw Print Rescue)

Last week, close to a month after the blaze ignited on Nov. 8, one couple was able to visit the lot where their home once stood and a special family member was waiting for them. Their dog Madison, who they hadn't seen since evacuating their Paradise home, was alive.

The K9 Paw Print Rescue posted the story to Facebook, noting that Madison’s parents were unable to get home to him when the fire spread. All they could do was hope and pray amid the heavy flow of devastating news that flooded headlines during the days they were separated from their Anatolian shepherd-great Pyrenees mix.

But they stayed positive and headed to their property hopeful.

“Madison was waiting for them as if he were protecting his former home,” the rescue wrote in the post. “Never give up!”

But this story has an extra delightful component.

Shalya Sullivan, a volunteer with the group, explained in the comments section that the couple’s other dog, Miguel, was found in Citrus Heights – some 100 miles away. After Miguel turned up, Sullivan would return to the Paradise property to put out food and water, hoping that Madison somehow survived.

When Miguel was reunited with his owners, Sullivan made some suggestions to help locate Madison. Days later, the bunch was reunited. Madison got his brother back and his owners were able to give them both a big hug.

“He had stayed to protect what was left of his home, and never gave up on his people,” Sullivan wrote on Facebook. “I’m so happy I’m crying as I write this. He didn’t give up through the storms or the fire.”