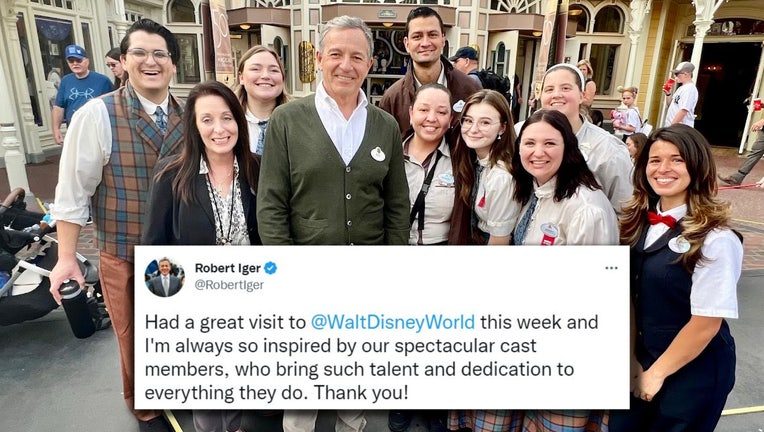 Disney CEO Bob Iger was in Florida this week and spent some time visiting the Walt Disney World theme parks, possibly his first visit since his return to lead The Walt Disney Company.

"Had a great visit to @WaltDisneyWorld this week and I'm always so inspired by our spectacular cast members, who bring such talent and dedication to everything they do," Iger wrote in a tweet, followed by an image of him with a group of cast members, which is how Disney refers to its employees.

Iger was reportedly with Josh D'Amaro, Chairman, Disney Parks, Experiences and Products, and Jeff Vahle, the president of Walt Disney World. Reports and sightings of Iger being in the parks began to appear on social media earlier in the week.

Vahle was in Disneyland last weekend where he met with Ken Potrock, who leads Disneyland Resort, and D'Amaro, according to posts on their Instagram accounts.

FOX 35 reached out to Walt Disney World for details on Iger's visit.

Disney announced in December that Iger would return to lead the company for a two-year stint, replacing former Disney CEO Bob Chapek, who was fired. Iger stepped down as CEO in 2020. In his new role, Iger is specifically tasked with tackling company's growth strategy, and finding a successor to lead the company after him.