Chapek addressed the issue during the company’s annual shareholder meeting while also announcing that Disney would be donating $5 million to organizations that fight to protect the rights of the LGTBQ+ community.  He first apologized for not speaking out sooner.

"I understand that many are upset that we did not speak out against the bill. We were opposed to the bill from the outset, but we chose not to take a public position on it because we thought we could be more effective working behind the scenes, working with lawmakers on both sides of the aisle," Chapek told shareholders. "I look forward to visiting with the governor with a small delegation of cast members who are involved in this movement."

Florida’s House Bill 1557, officially called the "Parental Rights in Education" bill, has received a wave of criticism from Democrats and LGBTQ advocates — who have often referred to it as the "Don’t Say Gay" bill. Statewide, the bill has sparked a swell of protests and student walkouts. 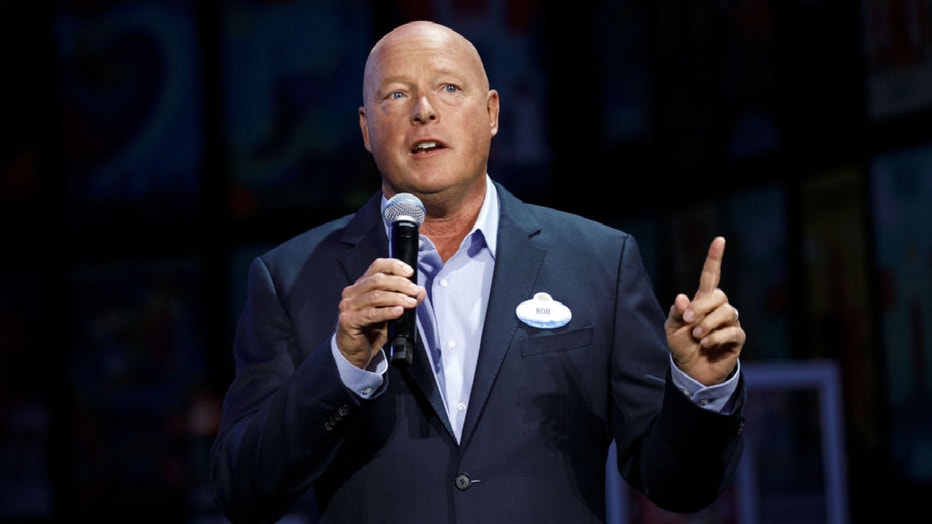 Bob Chapek, chairman of Walt Disney Parks and Experiences, speaks during a media preview of the D23 Expo 2019 in Anaheim, California, U.S., on Thursday, Aug. 22, 2019. Walt Disney Co. is turning the D23 Expo, the biennial fan conclave, into a big pus

The Florida Senate voted 22-17 this week to pass the bill along almost straight party lines. Sen. Jeff Brandes, R-St. Petersburg, and Sen. Jennifer Bradley, R-Fleming Island, voted with Democrats against the bill.  The Florida House voted 69-47 to pass the measure last month, meaning it is ready to go to DeSantis.

"I called Gov. DeSantis this morning to express our disappointment and concern that if the legislation becomes law, it could be used to unfairly target gay, lesbian, non-binary, and transgender kids and families," said Chapek.

Chapek added that they had an "extraordinary" conversation.

"He was very open to this conversation and finding out what aspects are most concerning and working to ensure that that could not happen in the state of Florida with this legislation," said Chapek on the call.

"Governor DeSantis has always been open to hearing from Floridians and having conversations about legislation – as long as those discussions are grounded in facts, not false media narratives," said Christina Pushaw, a spokesperson for Gov. DeSantis.

Pushaw said that Disney contacted the governor on Wednesday.

"This is the first time we have heard from Disney regarding HB 1557.  The governor did take the call from Mr. Chapek.  The governor's position has not changed," Pushaw added.

The proposal would require that instruction on sexual orientation and gender identity "may not occur" in kindergarten through third grade. For higher grades, the bill would prohibit such instruction if it is not age-appropriate or developmentally appropriate as determined by state academic standards.

"This [bill] doesn’t prevent that teacher from helping a student, from advising a student. What it does is specifically speak to planned instruction," Sen. Manny Diaz Jr., R-Hialeah, said in supporting the measure.

But the bill drew protests from LGBTQ-advocacy groups and has been the subject of headlines nationally, many of which have referred to it as the "don’t say gay" bill — a moniker given to it by critics.

"Despite the premise of the bill, I can tell you with absolute, 100 percent certainty, Florida’s educators are not indoctrinating young children with age-inappropriate or developmentally inappropriate curriculum. They’re not secretly pushing the gay agenda, the trans agenda, the woke agenda. It’s just not happening," Book said.

The president of the teachers union in Orange County said they have never received a complaint about these issues being discussed in schools.

"We’re going to have to really take a look at the final bill and see what it says and what it prohibits," said Orange County Classroom Teachers Association President Wendy Doromal.

Supporters of the "Parental Rights in Education" have pushed back against the "Don’t Say Gay" label.

Other parts of the bill seek to prohibit schools from withholding information from parents about students’ mental or physical health and well-being.

For example, the bill says school employees "may not discourage or prohibit parental notification of and involvement in critical decisions affecting a student's mental, emotional, or physical" health.

Senate Democrats also hammered part of the legislation that would allow parents to sue school districts for violations of the bill.  The bill includes an alternative process for resolving disputes, which would involve administrative hearings before special magistrates.

DeSantis on Monday appeared to endorse the bill, telling reporters that lawmakers are trying to ensure that parents can "send their kid to kindergarten without having some of this stuff injected into their school curriculum."

"Disney is a family-friendly company that creates wholesome entertainment for kids. The same Florida parents who take their families to Disney also support parental rights in education, because they do not want their young children exposed to inappropriate content about sex and gender theory at school," Pushaw reiterated.

Disney said it is reassessing its approach to advocacy and political giving in Florida and beyond.

The group Equality Florida plans to take legal action against the state regarding this bill.