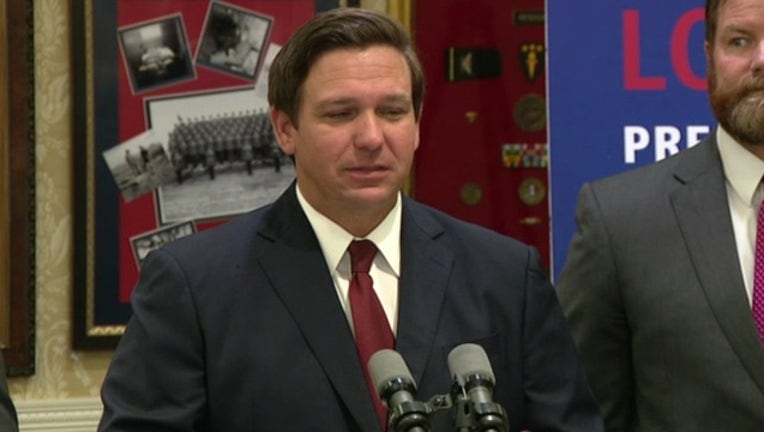 TALLAHASSEE, Fla. (NSF) - Gov. Ron DeSantis’ net worth dropped nearly 9 percent in 2018 as he left Congress and made a successful run for governor.

State officials faced a Monday deadline to file updated disclosures, which typically detail their finances as of the end of 2018.

DeSantis, who resigned his congressional seat in September after his primary-election victory, reported $116,000 in income last year from the U.S. House, a position that paid him $174,000 in 2017.

DeSantis also picked up $15,297 from the state last year while governor-elect in the transition period.

As he took office in January, DeSantis followed now-U.S. Sen. Rick Scott, who was the wealthiest governor in Florida history.

Unlike Scott, who has widespread financial holdings, DeSantis listed just over $3,500 in stock in Scottrade accounts in U.S. Steel and SiriusXM.

The sale of the Ponte Vedra Beach home will also cost DeSantis some rental income, as the first family made $5,500 rental income in 2018 and $27,500 the year earlier.

Both DeSantis properties had mortgages, including $263,100 on the Ponte Vedra Beach property as 2018 ended.

DeSantis was usually ranked as one of the least-wealthy members of Congress. For example, he was ranked 391st among the 435 House members in terms of net worth in 2015 by OpenSecrets.com, when his net worth was estimated at $54,000. Federal disclosure rules are different from Florida, which requires more exact numbers.

Meanwhile, Scott, who served the first week of this year as governor, reported to the state a net worth of $91.75 million as of the end of 2018.

Scott, who made a fortune in the health-care industry and other businesses before entering politics, had started 2018 with a reported net worth of $232.6 million. Scott spent an estimated $64 million of his own money for his successful U.S. Senate run against Democrat Bill Nelson.

State records don’t require candidates and elected officials to include investments by spouses.

As part of Scott’s federal filing last year, he disclosed former First Lady Ann Scott was worth between $171 million and $208 million.