It will soon be easy to cross Florida in an electric vehicle. Dozens of charging stations will be added in the coming weeks.

He made the announcement from the Turkey Lake Service Plaza in Orlando alongside the Florida Department of Environmental Protection Secretary Noah Valenstein and representatives from Tesla.

The funds for the stations will come from a settlement worth millions of dollars against Volkswagen for violating the Clean Air Act.

MORE NEWS: Gov. DeSantis: Students should be in classrooms in the fall, not learning online

The charging stations will more than likely be completed within the next two months, DeSantis said.

During the news conference, DeSantis defended the decision to reopen Florida schools despite the surge in coronavirus cases, saying, “It should not be political, it should be based on the facts." 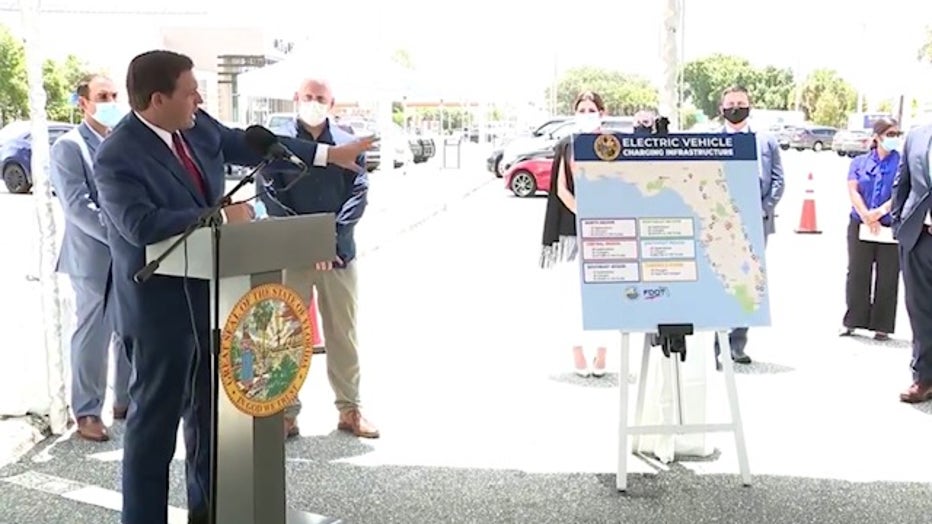 DeSantis cited the negatives of kids being isolated from teachers and peers.

“I don’t think there’s anyone who can make an argument that this is especially risky for kids,” he said. ”Parents should have the ability to make the decision they want.”

DeSantis recently said that state schools should reopen as soon as possible.

"I want our kids to be able to minimize this education gap that I think has developed," DeSantis said. "In spite of good efforts with the online, it's just not the same, so I worry about that gap."

Per the new executive order, all public schools and charter schools must open their buildings for students at least five days per week.

On Friday,  Florida saw it's second-highest daily increase, adding another 11,433 new coronavirus cases. The total statewide is now at 244,151, according to the Florida Department of Health.