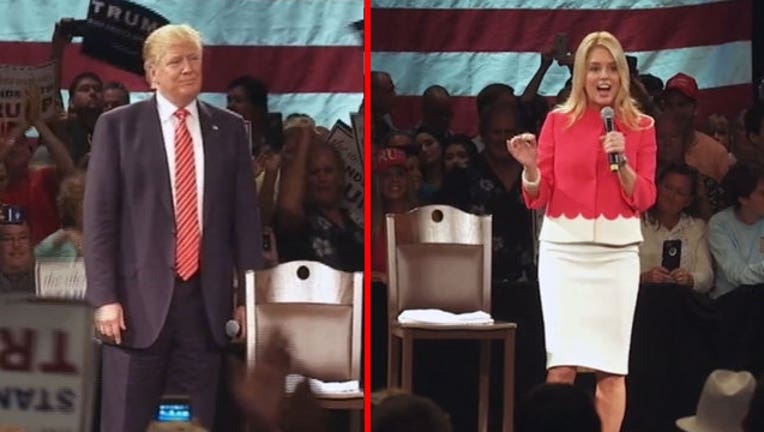 WASHINGTON (AP) - House Democrats are calling for a federal criminal investigation into an improper $25,000 donation Donald Trump's charity made to a political group supporting Florida's attorney general after her office said it was weighing legal action against Trump University.

The Associated Press first reported in June that Florida Attorney General Pam Bondi personally solicited the money during a 2013 phone call that came after her office received complaints from former students claiming they were scammed by Trump's namesake get-rich-quick real estate seminars.

The Donald J. Trump Foundation check arrived just days after Bondi's office told a newspaper that it was reviewing a lawsuit against Trump University filed by New York's attorney general. Bondi's office never sued Trump, though she denies his donation played any role in that decision.

The Republican Presidential nominee later paid a $2,500 fine over the check from his foundation because it violated federal law barring charities from making political contributions.

In a letter that all 16 Democrats on the House Judiciary Committee sent Tuesday to U.S. Attorney General Loretta Lynch, ranking member John Conyers of Michigan said federal investigators should determine whether the 2013 donation and Bondi's decision not to join the New York lawsuit violated federal bribery or tax laws.

"This fact pattern indicates that these payments may have influenced Mrs. Bondi's official decision not to participate in litigation against Mr. Trump," Conyers wrote, specifically citing the reporting of AP and others. "A number of criminal statutes would appear to be implicated by this course of conduct."

Bondi has endorsed Trump's presidential bid and has appeared with him this year on the campaign trail.

She has said the timing of Trump's donation was coincidental and that she wasn't personally aware of the consumer complaints her office had received about Trump University and the Trump Institute, a separate Florida business that licensed the Trump name and curriculum.

Neither company was still offering seminars by the time Bondi took office in 2011, though dissatisfied former customers were still seeking promised refunds.

Trump's spokeswoman Hope Hicks confirmed to AP that Trump and Bondi spoke before his charity donated to a group supporting her candidacy, but says they didn't discuss any potential lawsuit. Neither Trump's or Bondi's spokespeople has responded to questions about what the two did discuss, or provided the exact date of the call.

Trump has boasted in the past that he expects and receives favors from politicians to whom he gives money.

"When I want something I get it," Trump said at an Iowa rally in January. "When I call, they kiss my ass. It's true."

Trump's campaign says the improper foundation check was the result of a series of clerical errors, and that the billionaire businessman had intended to support Bondi with personal funds.

The Trump Foundation on its 2013 tax return then incorrectly reported that the $25,000 was paid not to the pro-Bondi political group, but to a similarly named charity in Kansas that got no Trump money.

The Washington Post first reported that Trump's charity paid an IRS penalty of $2,500 earlier this year, following media reports about the impermissible 2013 donation.

Trump's foundation, which for years has been funded by money the billionaire businessman raises from others rather than his own cash, has come under increasing scrutiny following reports by the Post, AP and others.

In May, the Post reported that most of the $6 million Trump said he raised for veterans groups at a highly publicized January event wasn't distributed until the newspaper began asking questions. After his campaign released a list of groups receiving about $5.6 million, about half of the 30 reached by AP said they'd received checks around the time of Trump's May 24 Post interview.

In an extensive review earlier this month, the Post found four charities that said they never received money even though the Trump Foundation reported making donations to them.

A New Yorker, Trump owns a Florida home as well as resorts and golf courses in the state. Records show he has made $253,500 in political donations there since 1999, most of it going to Republican candidates, the state party or GOP committees.

His daughter, Ivanka Trump, gave a $500 personal check to Bondi a week before her father's charity money came in, as well as another $25,000 to the Republican Party of Florida the following year.

Donald Trump also hosted a March 2014 fundraiser for Bondi on the lawn of his palatial Mar-a-Lago Club. Attendees were asked to give the $3,000 maximum individual donation allowed under state law.

Records show that Bondi's re-election campaign received 24 checks totaling $57,000 on the date of the Trump fundraiser. Justice for All, the political committee supporting Bondi, also took in $30,000 that day.