The Centers for Disease Control and Prevention is sounding the alarm about meningococcal disease, as it is investigating at least 24 cases and six deaths in Florida.

ORLANDO, Fla. - The Centers for Disease Control and Prevention is sounding the alarm about meningococcal disease, as it is investigating at least 24 cases and six deaths in Florida.  It’s one of the worst outbreaks of the disease in U.S history.

Raphael Castellano is one of those cases. On June 1, he was rushed to the hospital.

"That day I wasn’t feeling well. I drove home, but I was dizzy," he explained.

It went downhill from there. The doctor told him it was meningitis.

"When I got to the hospital, the doctor told my family that I wasn’t going to make it, that I was going to die right there, and they got the priest and just like get ready," Castellano said from his hospital bed.

The disease can affect anyone, but right now it’s affecting gay and bisexual men. It can infect the lining of the brain and spinal cord and even the bloodstream.

"It’s not a sexually transmitted disease," said Dr. Todd Husty of Seminole County EMS. "It just so happens that it got into that community, and just like any other community, it takes being close to other people. It’s not something you get like COVID, or flu, where it’s just a respiratory virus. You have to have close contact."

It can start with a headache, fever, and stiff neck and rapidly worsen.  Raphael’s body fought back and with the medicine that he was given, he was able to improve. He’s still in the hospital and has a long road to recovery. 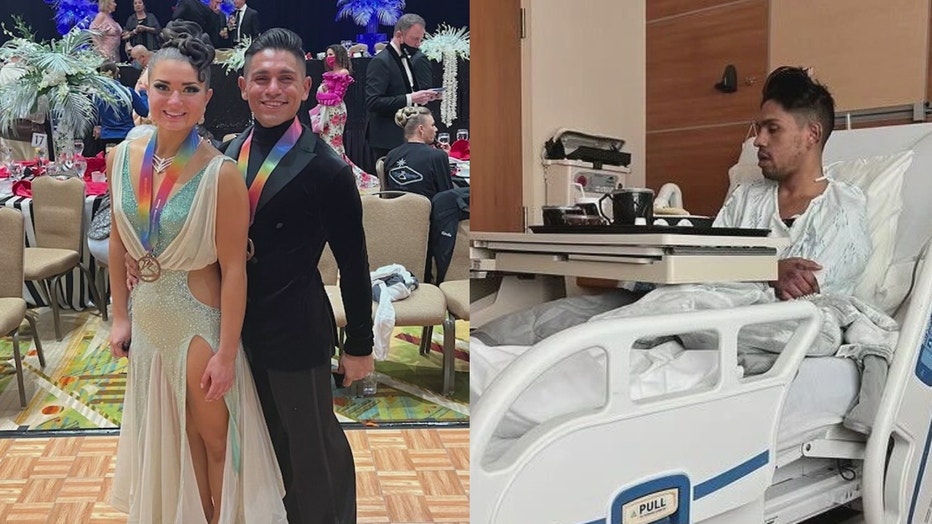 Raphael Castellano is recovering after a meningitis infection that nearly claimed his life.

"My skin was completely black, and now I’m kind of like a caterpillar. Every day, as I’m getting better, things are getting back to normal," said Castellano.

He’s hopeful and faithful, that he will get back on his feet.

"So I can move my legs, but they’re black, so that’s the hard part," said Castellano. "It’s a waiting game, it could take months."

Castellano is warning others to get the meningococcal vaccine, which is readily available.  He doesn’t have insurance and is hoping for help. His friends and family have set up a Go Fund Me page: Fundraiser by Emily Bergman : Help Rafael dance again! (gofundme.com)

The most common symptoms include:

There are often additional symptoms, such as