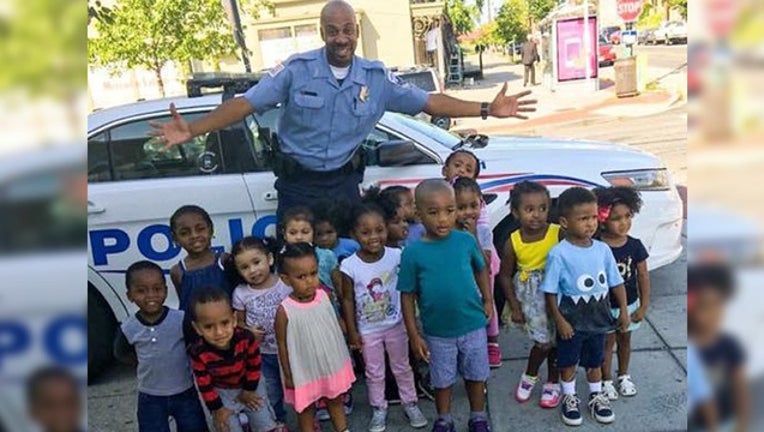 WASHINGTON - An officer serving Ward 4 in the District of Columbia posted a picture to Facebook with hopes to bring back 'Officer Friendly' to the streets.

Derrick J. Potts, born and raised in the District of Columbia, loves his city so much that 13 years ago he took an oath to protect and serve the people in it.

In his timeframe of protecting and serving in Ward 4 of D.C., he has seen a dramatic change in people's perception towards officers turn to the worst.

The media has seen a lot of police brutally in the past year. As a result, it has left civilians and officers with heavy hearts and altered perceptions. That is why he has made it his mission to reinforce 'Officer Friendly' in the streets.

Officer Potts told FOX 5 DC, "We officers get a bad rep, but all officers aren’t bad."

In a picture uploaded to Facebook by the officer, he's seen with a group of children. What makes the post extra special is his caption.

"Community Policing with all my kids. They are all my kids because when I'm on duty I have to keep them safe.#4DOfficerfriendly"

As a father of two beautiful daughters, 8-year-old Amber and 14-year-old Autumn, he feels the need to ensure that all little ones are kept safe-- call it fatherly instincts. However, when you combine his fatherly instincts with his passion to serve then protecting children in his neighborhood increases by tenfold.

"The kids are very respectful. When they see me they always say, good morning Officer Potts."

But the kids aren't the only ones that know him by name, the adults in Ward 4 do too. They know and trust when he comes to their neighborhoods that he's doing his job, and above all doing it well.

"You gotta give respect to get respect." According to Officer Potts, "We need that 'Officer Friendly' back in the streets. I was born and raised in D.C., and we had those officers when I was coming up. We need to implement it here."

He came up with the hashtag #4DOfficerFriendly (4D standing for Ward 4) in efforts to raise awareness on his mission and message.